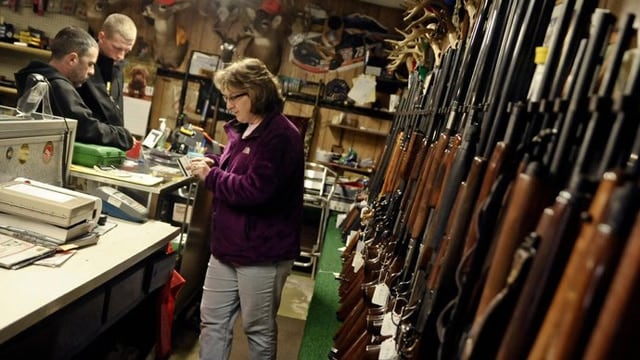 The surge comes two days after Attorney General Jeff Sessions announced a review of NICS — a system he says is undermined by spotty records and lackadaisical reporting from state and military agencies, as evidenced by the shooting at a Texas church earlier this month.

“The National Instant Criminal Background Check System is critical for us to be able to keep guns out of the hands of those that are prohibited from owning them,” he said.

The review could spur changes to the ATF Form 4473, the NICS application.

Fixing NICS became a congressional talking point after a former Airman gunned down 26 people at the First Baptist Church in Sutherland Springs, Texas Nov. 5. Investigators said the shooter — convicted in 2012 for assaulting his wife and stepson while serving the U.S. Air Force — should’ve never owned the rifle used in the attack. Military officials admitted never turning over the shooter’s criminal records to the FBI, therefore allowing him to pass a NICS check, despite his prohibited status.

In the meantime, the new Black Friday record pokes holes in the longstanding narrative of the industry’s “Trump Slump” — the euphemism popularized in the media to describe how sales slowed under a new, gun-friendly presidential administration.

While overall estimated sales remain down 12.5 percent over 2016, the industry’s busiest selling season kicked-off Friday and will extend through winter. Dealers processed 5.3 million applications in November and December 2016, alone — representing about one-fifth of the 27.5 million NICS checks completed last year, the biggest in the system’s two-decade history.

“We are not yet seeing the recovery that we expected to see,” said Vista Outdoor Chief Financial Officer Stephen Nolan during a conference call with investors earlier this month. “Shooting sports has always been a cyclical industry with periodic downturns lasting anywhere from 12 to 24 months. While we may not be at the bottom as of yet, we believe that we are very close and we anticipate that the market will show returns to growth over the next 18 months.”