Senator to parents: Stop buying toy guns until they are changed 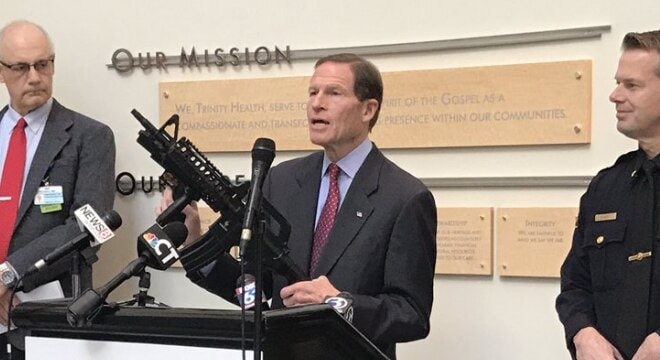 A Connecticut Democrat wants parents to pump the brakes on buying toy guns until a bill he has introduced to make them more readily recognizable passes Congress.

Joining Hartford Police and staff at St. Francis Hospital, U.S. Sen. Richard Blumenthal last week described his pending legislation as a simple fix aimed at keeping the public and law enforcement safe. But until it makes it to law, he wants parents to take action on their own to keep toy guns out of their houses.

“What’s important here is parents demonstrating responsibility by stopping any purchases of these guns right away until either the gun manufacturers change their practices to make it safer voluntarily, or for my law to be adopted,” said Blumenthal as reported by the New Haven Register. “Until imitation guns are made safer, parents should stop buying them.”

The lawmaker’s Imitation Firearms Safety Act was filed earlier this month as  S.2150 and, though the bill’s language is not available, Blumenthal’s office stresses that it would place new restrictions on toys to include a brightly marked barrel that cannot be removed.

Federal law has, since 1988, required that imitation firearms and toys have a permanently affixed blaze orange plug inserted in the barrel and limits the sale of BB guns and similar devices to minors.

That has not stopped states from passing their own, more stringent, requirements on airsoft, air guns and toys made to resemble firearms in recent years that exceed federal mandates.

The new legislation has been referred to the Senate Committee on Commerce, Science, and Transportation.