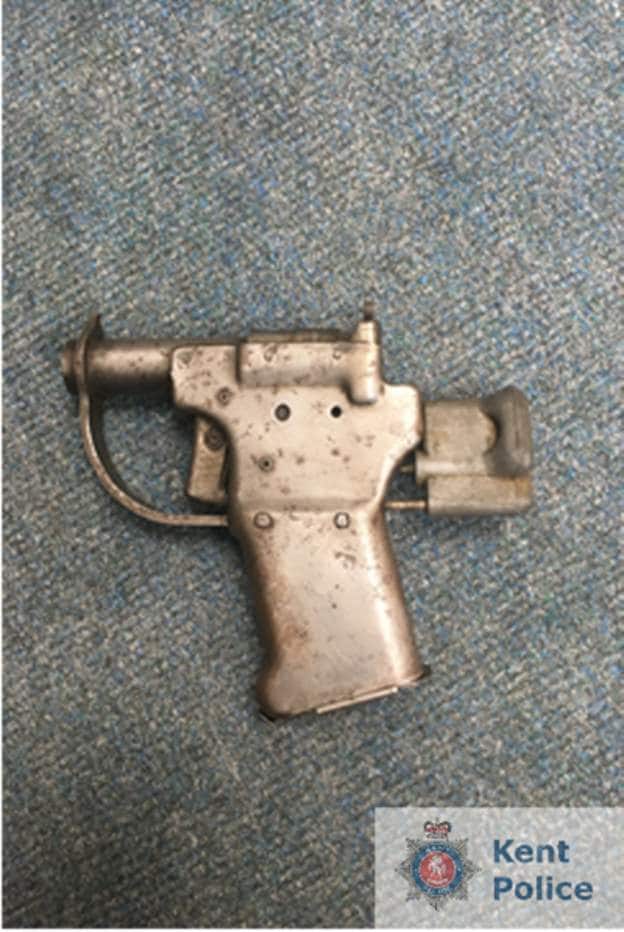 The Liberator, seen here with its chamber open, was designed to be dropped into German-occupied Europe in a cardboard box complete with a cartoon instruction sheet and a few rounds of .45ACP ammo. (Photo: Kent Police)

The first national firearms surrender in England and Wales in years has produced a treasure trove of antique weapons to include a famous WWII-era “gun to get a gun.”

The two-week amnesty, coordinated by the National Ballistics Intelligence Service, allowed gun owners to turn in firearms, ammunition and gun-like items to police without fear of penalties or punishment. One of the more interesting items coughed up was an FP-45 Liberator pistol handed in at the Folkestone police station last week as reported by Kent Police.

The Liberator, a $3 gun massed-produced by the Inland Guide Lamp Manufacturing Division of General Motors, was a simple .45ACP-caliber single-shot pistol designed to be dropped across occupied Europe by the Allies to help resistance groups by providing them a throw-away handgun that could be used to either assassinate local Nazis or take shots at German soldiers– whose weapons would then be pressed into service.

However, most Liberators never made it to their intended users and were instead scrapped, making them rare and collectible today. As reported by Kent Online, the recently turned-in FP-45 will likely be saved from the blowtorch.

“This firearm is a part of history and I am sure it will be a welcome addition to the collection at the Royal Armouries Museum,” said Rob Fordham with the Kent Police. “Weapons such as these are often forgotten heirlooms which have been taken from past conflicts and passed down over the generations.”

According to information from NABIS, the last national surrender took place in 2014 and saw more than 6,000 items handed in, yet stats issued by the Office for National Statistics showed a 27 percent rise in firearms offences in England and Wales for the one-year period up to the end of June 2017 when compared to the previous year.

The latest surrender campaign focused on “flat guns” which may have been war trophies or other firearms left behind by past generations that are unwanted. A spot by NABIS made available for publication to media has a grandmother figure take what is portrayed as an old military handgun implied owned by her departed Army veteran husband, to police– just in the nick of time.

Other agencies posted their intake from the events, which concluded Sunday, shows additional war trophies to include a rare .455-caliber Colt 1911, two Argentine Ballester Molinas brought back from the Falklands Islands War in 1982, deactivated machine guns– including a Bren gun force-fed a belt of ammo through the magazine slot– starter pistols, flare guns, vintage air guns, replicas and the like. Of the more than 140 items collected by London’s Metropolitan Police in the first week of the amnesty, the total included 48 air weapons and 23 imitation guns.

So far 20 items have been handed over to officers including shotguns, air weapons and ammunition as part of the @NABIS_UK national #GunSurrender https://t.co/3EgK90Hrxl #GiveUpTheGun pic.twitter.com/QddE3AdT4N

These pistols, used in the Falklands conflict, were handed in to us as part of the @NABIS gun surrender. More info:https://t.co/GyRQ1WH8Vh pic.twitter.com/05Ax0XyEc6

#GunSurrender 13-26 November 2017 in #Barnstaple and results from across Devon and Cornwall from week 1 of #firearms and #ammunition surrender. If you don't want it, HAND IT IN. More here: https://t.co/eWO8NZg7eV pic.twitter.com/DCezVMMzEk

#GunSurrender Some of the items handed in to #Torquay #police enquiry office on day 3 of the #firearms and #ammunition surrender which runs until 26 November. All you need to know here: https://t.co/9fC1adxrJd pic.twitter.com/w8Ct8eZWvm

And here's news of another success in the fight against gun crime: These two weapons were taken off the streets of the West Midlands just hours ago.https://t.co/mgy4aOMJkD pic.twitter.com/EdF8UVBF2E

#GunSurrender 13-26 November 2017. At the end of first day (13 Nov), guns and ammunition handed in at #Torquay and incendiaries in #Camborne. Don't want it? Not sure if it's legal? HAND IT IN, GET IT OUT OF CIRCULATION, MAKE COMMUNITIES SAFER. Here's how: https://t.co/hROH4HEXGk pic.twitter.com/TPOuXEvbLb

Big thank you to the member of public who handed this in as part of the National Firearms Surrender. Keep them coming! CJR #GiveUpYourGun pic.twitter.com/LB6Bhv2313

If you have an unlicensed firearm in your possession, or know where one is being kept, now is the chance to hand it in.
The Kent Police firearms surrender ends Sunday 26 November. Fore more info please visit: https://t.co/DqoLGaZIRO pic.twitter.com/JaKKrKTw8t