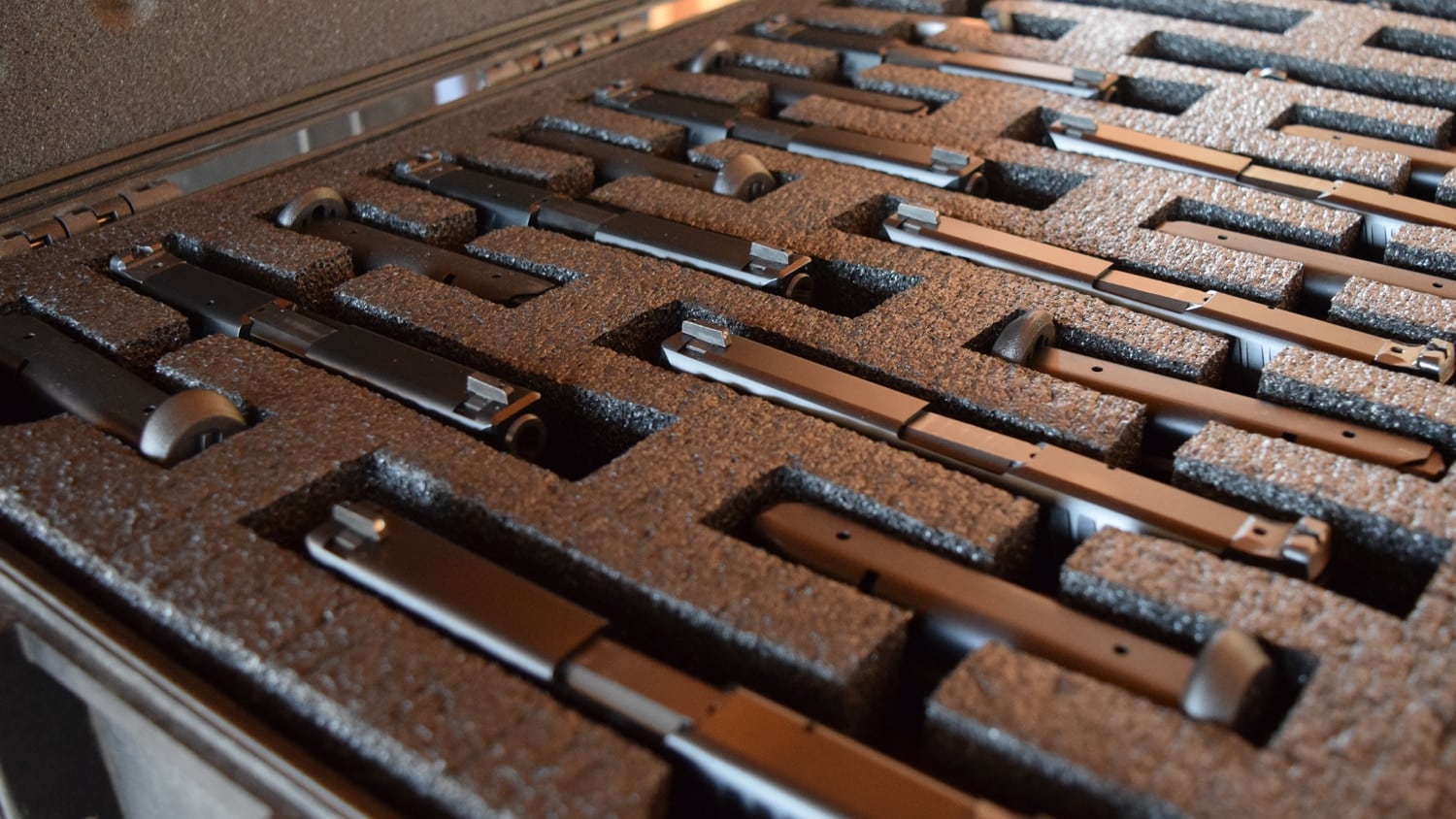 A box full of Remington pistols on display in August 2017 at the Gunsite Academy. (Photo: Daniel Terrill/Guns.com)

Two of the largest gun companies in the U.S. have had their corporate credit ratings downgraded amid decreasing sales and soft market conditions throughout the year after the surprising political victory by President Trump.

Citing debt levels, S&P Global lowered ratings for Remington Outdoor Company to “negative” for its risk of defaulting on loans and Vista Outdoor to the much less severe “stable” financial condition.

S&P analysts say Remington is at “a heightened risk of a restructuring of some form over the next six to 12 months” because they don’t believe the company will rake in enough cash to cover fixed costs and repay $575 million in loans due in 2019.

So far this year, Remington’s sales have trailed last year’s by $177 million, putting the company in the red by $60.5 million, financial filings show. The company’s decrease has largely been a result of fewer people buying AR-style rifles. Poor sales aside, the corporate downgrade was due to the amounting debt.

Remington executives largely declined to respond to direct questions about debt during last week’s conference call with investors. “We are mindful of our debt maturities coming due in the second quarter of 2019. We continue to have discussions with our lenders and will provide an update at an appropriate time,” said James Geisler, chairman of Remington’s board, in a prepared statement.

Remington’s profits have suffered over the past three or so years because the company re-invested monies by consolidating manufacturing operations for more than a dozen brands to Huntsville, Alabama. The company’s aim was to lower operating costs.

S&P analysts lowered the corporate rating for Vista — which is comprised of roughly 50 brands, many of which produce ammunition — to “outlook is stable.” As of Oct.1, they estimate Vista has $1.2 billion in outstanding debt, but the downgrade reflects their “expectation that operating performance will remain weak during the remainder of the fiscal year ending March 31, 2018.”

Vista reported a 16 percent dip in sales halfway through the fiscal year and lowered its financial outlook for the remainder of the year, saying annual revenue will not exceed $2.26 billion. Yet, S&P analysts say the stable outlook reflects their belief that Vista’s ammo sales could improve and excess inventory could sell off.

Moody’s also downgraded Vista’s rating this year, forecasting by March 2018 that Vista’s debt will outweigh performance and leverage should decrease by December 2018

The gun industry as a whole has largely been in a slump since Trump took the White House last year and Republicans won a majority in both chambers of Congress. Even though the rate of gun sales only trail 2016 — the biggest year on record — by about 12 percent, gun manufacturers overproduced in anticipation of Democrat and pro-gun control candidate Hillary Clinton taking office. Increased products have caused inventory channels to largely overflow and clog. Yet, industry executives say discounting and rebates have driven sales but at the expense of profit.