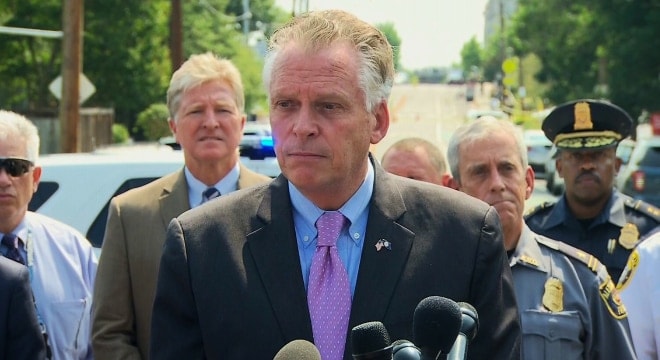 Virginia Gov. Terry McAuliffe (D), seen here at a press conference, has authorized emergency regulations at a Richmond monument that ban guns and other weapons from events. (Photo: AP)

The Lee Monument in Richmond is owned by the state and McAuliffe last week announced emergency regulations banning guns and other weapons, limiting crowd sizes, requiring permits for rallies, and other restrictions in the aftermath of a deadly incident at a similar monument in Charlottesville earlier this year.

“We believe these regulations can be a model for localities across Virginia as they consider how to approach these types of events in the future,” said McAuliffe in announcing the regulations, which will be in effect for 18 months while state officials work on a final regulation.

The VCDL, in a statement posted Monday, argues there was no violence at the last rally at the statue to the Confederate general in Richmond, although guns were allowed, and says McAuliffe is overstepping his powers on the issue.

“The Governor has issued another ’emergency’ regulation prohibiting guns during rallies by tying the condition of ‘no guns or weapons’ to issuance of a permit,” said the group. “VCDL takes no position on the monument itself, but we do take umbrage at the Governor thinking he can prohibit guns there considering that he has no legal authority to do so from the General Assembly.” As such they have their legal team reviewing the matter.

The statue to Lee, erected in 1890, is a focal point for Richmond and is the largest monument in the Monument Avenue Historic District. McAuliffe temporarily banned events at the location earlier this summer until the emergency regulations were formulated.

“Until a full review process has been concluded, it is a threat to public safety to allow permit-requiring activity to occur in the absence of such sensible regulations that should be implemented to govern all expressive activity at the Lee Monument, no matter its content,” said McAuliffe in his executive order issued earlier this year.