Announced with little fanfare from CZ, a mock-up of the suppressed Scorpion debuted on Instagram followed by an actual picture of the gun at work in the hands of a shooter.

The fully welded S2 Ti Reflex can sits underneath a HB Industries handguard, extended past the Scorpion’s muzzle by roughly 6-inches. Tipping scales at just over 9-pounds, the S2 Ti Reflex features a 2-inch reflex blast chamber which the company says gives the suppressor similar volume to that of larger cans but without the added bulk. 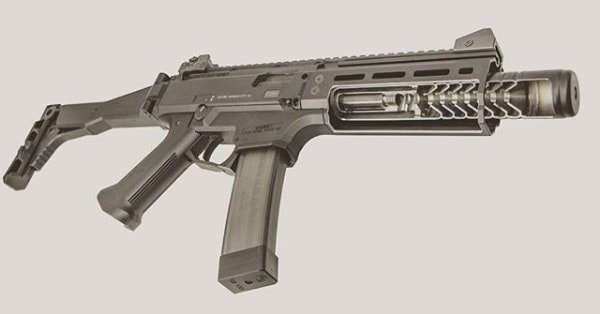 CZ says the upgraded Scorpion is capable of tossing out 147 grain defensive loads at well under 130 dB. The S2 Ti Reflex equipped Scorpion came as a result of the increased use of the Scorpion among law enforcement. The company said the said they sensed the need for suppressed units and began working on a silencer model conducive for the Scorpion.

“The can in question was something that we couldn’t source in the marketplace, requiring us to make it ourselves. Teaming up with the airflow specialists at Aerocharger, we were able to achieve the suppression of larger, bulkier cans but in a much lighter, shorter package,” CZ said in a statement.

Available in either a stainless steel or titanium design, the new Scorpions have a launch date of 2018; though no specific time frame has been given as of yet. The stainless steel variant touts a price tag of $599 while the titanium version slips in at $929.