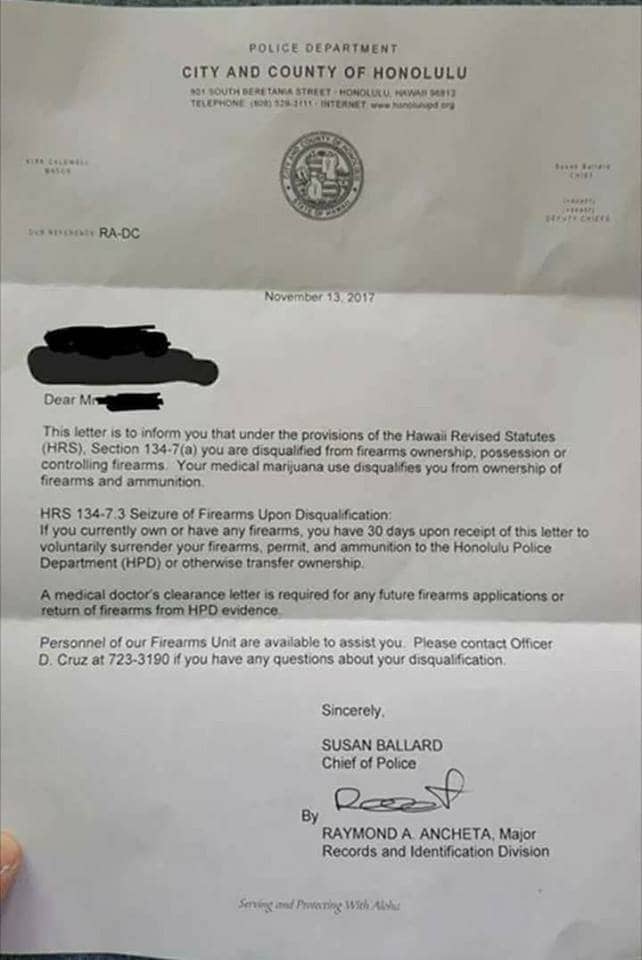 Honolulu Police Chief Susan Ballard has mailed letters to area medical marijuana patients with registered firearms, saying they needed to give up their guns and ammo or turn them in to police — and the clock is ticking.

About 30 individuals with cannabis cards have been sent the letters so far, citing state firearm law as the reason to get rid of their guns, the Honolulu Star-Advertiser reported.

“Your medical marijuana use disqualifies you from ownership of firearms and ammunition,” the letter says, advising the gun owner has 30 days to surrender their firearms, gun permit and any ammunition to the agency or “otherwise transfer ownership.” Those wanting to register for a permit in the future, required in the state for gun possession, would need “clearance” from a doctor.

While some areas have pushed mandatory gun registration going as far back as the Sullivan Law in New York in 1911, and just six states currently require registration of some types of firearms, Hawaii is the only one to require the registration of all firearms through the county police chief — thus providing the Honolulu PD with a ready list of those with legal firearms in their jurisdiction.

Leafly News, a media outlet that covers marijuana legalization topics, confirmed the letters had been sent out and advises the news from Hawaii “may represent the first time a law enforcement agency has proactively sought out state-registered medical marijuana patients and ordered them to surrender their guns.”

That’s not to say the federal government and other states have been friendly to the concept of legal marijuana and guns.

Since 2000, Nevada has granted marijuana registration cards exempting those who hold them from state prosecution for marijuana-related crimes and one cardholder — refused a gun sale in 2011 solely because she had a card — filed suit in federal court against the government on First, Second and Fifth Amendment grounds. Last September the U.S. 9th Circuit Court of Appeals upheld lower court rulings in her case, saying that refusing gun sales to otherwise law-abiding cannabis patients does not violate their Second Amendment rights.

Last November, the Bureau of Alcohol, Tobacco, Firearms and Explosives released a revised version of Form 4473, explicitly warning gun buyers “the use or possession of marijuana remains unlawful under federal law regardless of whether it has been legalized or decriminalized for medicinal or recreational purposes in the state where you reside.”