Suspect dead after firing shots from high-rise condo in Nevada 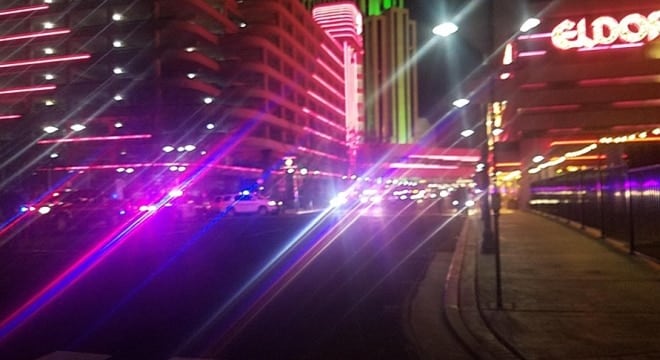 Authorities cordoned off Sierra street in downtown Reno on Tuesday night during an active shooter event that left one, the suspect, dead. (Photo: Reno PD)

Reno police say a man is dead following an active shooter incident late Tuesday after he opened fire with a rifle from the eighth floor of a downtown condo.

The currently unidentified subject fired for approximately 30 minutes into the area of Sierra street downtown from The Montage, a high-rise condominium complex downtown, the Reno Gazette-Journal reported.

Killed after his location was breached by Reno Police and Washoe County deputies, RPD Deputy Police Chief Tom Robinson said the suspect’s motive is unclear at this time. A female taken hostage by the subject was rescued unharmed though Robinson said she was “obviously traumatized and shaken up.”

Authorities said there were “no reports of injuries to citizens or officers or deputies.” The subject, who was at first described as detained died on the way to a hospital.

The condo complex reportedly has a connection to another recent shooting in the news. According to the Gazette-Journal, the shooter in the October Route 91 Harvest festival attack in Las Vegas maintained a condo at The Montage until last December. Police advise the area around The Montage will be closed to the public as they conduct their investigation.

Though details on the event are slim, gun control advocates were quick to respond to the news in Reno.

“Last night’s shooting was all too similar to the deadliest shooting in modern American history, which took place on the Las Vegas strip just two months ago,” said Alice Gordeky with Moms Demand Action in a statement Wednesday blasting Attorney General Adam Laxalt and Gov. Brian Sandoval for not implementing an expanded background check voter initiative the group backed. “Thankfully, there were no victims last night in Reno – but there easily could have been. We cannot allow these incidents to become normal in our state. Instead, we must do everything we can to strengthen our gun laws.”