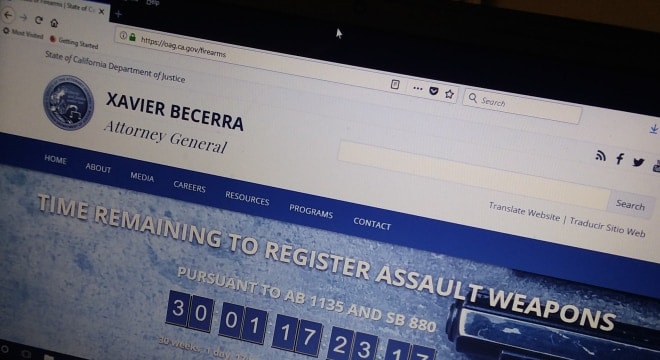 The clock is ticking to register firearms newly classified as “assault weapons” in California.

A group of individuals and Second Amendment groups has filed suit against the state’s pending new regulations on “bullet-buttons” and assault weapons.

In a complaint filed in a Riverside County state Superior Court, four gun owners– George Holt, Irvin Hoff, Michael Louie, and Rick Russel– contend many the firearms they have legally owned or built are now subject to new retroactive mandates from an out-of-control California Department of Justice that is flexible with the enforcement of new laws passed last year.

“By making and enforcing unlawful rules, and going around the rules to do it, the DOJ is putting tens if not hundreds of thousands of law-abiding people at risk of serious criminal liability,” said the plaintiffs’ attorney, George M. Lee, in a statement. “This case seeks to make the DOJ follow the same laws they impose on others and protect law-abiding gun owners in the process.”

In the 55-page complaint, the gun advocates argue state regulators as far back as 1989 have tweaked the existing statutory definitions of what constitutes a legal gun in California, adjusting the provision for items and firearms “grandfathered” in subsequent changes incrementally, often deleting old definitions altogether only to replace them with “entirely different content” with the effect of making entire classes of firearms suddenly illegal in the state. In effect, usurping the state Legislature’s intent while exposing a growing number of gun owners to criminal liability.

Gov. Jerry Brown signed SB 880 and AB 1135 into law last year, mandating changes to how the state defines and regulates assault weapons, however, there has been a shifting series of proposed new rules from DOJ on how to interpret the new laws, which were withdrawn several times.

In August, the California Office of Administrative Law approved the contentious new rules. Under the guidelines, those in the state who have firearms that meet the expanded definitions of an assault weapon will have until July 2018 to register their guns through the California Firearms Application Reporting System, with a mandatory $15 fee per registration. Those submitting applications will have to upload digital photos of the firearm including of the magazine release, of each side of the receiver and the barrel. Hobbyists who craft their own firearms will have to apply for a serial number through the system before completing their gun.

All this while the website designated for the registry updates has often been unavailable, leaving many gun owners anxious and frustrated.

“The government agencies responsible for enforcing the law must also follow the law,” said SAF founder Alan Gottlieb said. “This case is an important step in protecting law-abiding gun owners from an out-of-control regulatory state.”