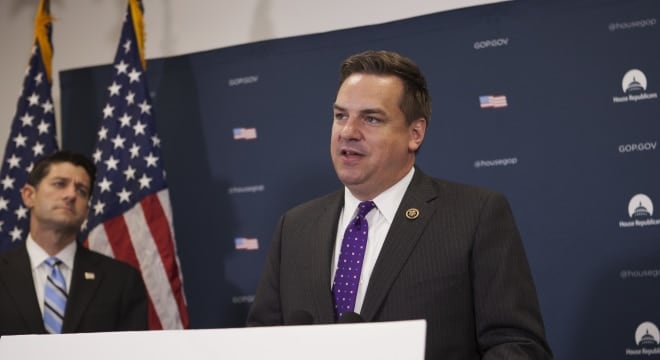 “An overwhelming majority of Americans support concealed carry reciprocity. Momentum, common sense, and the facts are on our side,” said the sponsor of the reciprocity bill, U.S. Rep. Richard Hudson, R-NC. (Photo: House Republican Conference)

A measure expanding carry protections slammed by gun control advocates is set for a full vote in the House this week but may be merged with other proposals.

The bill, H.R. 38, was marked up by the House Judiciary Committee and is on the weekly schedule for lawmakers to vote on this week, with some 213 signed on to support the move.

“An overwhelming majority of Americans support concealed carry reciprocity. Momentum, common sense, and the facts are on our side,” said the sponsor of the reciprocity bill, U.S. Rep. Richard Hudson, R-NC. “I want to thank Speaker Paul Ryan for his strong support of the Second Amendment, and I urge my colleagues to support this common-sense bill to protect law-abiding citizens.”

The news came as Missouri Attorney General Josh Hawley led 22 other states in urging lawmakers to pass the legislation, a counter-balance to a national mayors group, attorneys general in 15 mostly blue states, and a host of gun control organizations that oppose the move.

One caveat that gun rights advocates warn of with H.R.38 is the likelihood the bill will be amended to include the language of a new “Fix NICS” act, which would add several accountability measures designed to ensure that federal agencies submit the records of criminals, domestic abusers and others prohibited from possessing guns to the FBI-maintained system while giving states incentives to up their own reporting.

“Does the NICS background check system have problems? Yes, it results in tens of thousands of unjustified denials of gun purchases every year. But like many bills in Congress, the fix-NICS doesn’t live up to its name – it will likely do the opposite,” warned U.S. Rep. Thomas Massie, a Kentucky Republican who restarted the Second Amendment Caucus earlier this year. “It throws millions of dollars at a faulty program and it will result in more law-abiding citizens being deprived of their right to keep and bear arms.”

Massie concedes the NICS language may be added to gain Democrat support for concealed carry reciprocity in the Senate, where a companion measure has 38 supporters, a move he argues is misguided.

“If someone is naïve enough to think that’s going to work, and they’re willing to accept fix-NICS to get reciprocity, then they should ask the Senate to go first with the combined bill,” said Massie.