Each model in the DM series has an ambidextrous magazine release in front of the magazine well, reminiscent of the Tavor (Photos: Remington)

Big Green’s new 870 DM series has a little something for everyone in a range that includes tactical and home defense models, a boar blaster, and a Tac-14 Shockwave firearm.

Announced Tuesday, Remington‘s fresh take on the tried-and-true 870 pump brings a three- or six-shell detachable magazine to the mix on each of a half-dozen new variants. Each 12-gauge ships with a single proprietary six-shot mag with the exception of the 870 DM Tactical /Predator — which sports Kryptek Highlander camo and is billed as a turkey and hog gun– that includes both a three and a six-shot detachable box, though Remington advises additional magazines will be available for purchase.

The 870 DM Magpul, the model first to hit the market, includes a Magpul SGA stock and MOE M-Lok forend with a Super Cell recoil pad. The 18.5-inch Rem Choke barrel includes an extended ported tactical choke and is equipped with XS steel front and ghost ring rear sights, the latter mounted on a Picatinny rail section above the receiver. MSRP is $799.

The more sedate 870 DM, priced at $529, comes with a standard corn cob forend on the slide, black synthetic stock, and an 18.5-inch cylinder bore barrel.

The 870 DM Hardwood model, as its name suggests, ships with a standard hardwood stock and forend. Like the 870 DM above, it uses an 18.5-inch cylinder bore barrel and retails for $529.

The only model to ship with two different capacity mags from the factory, the 870 DM Tactical /Predator has an over-molded ShurShot thumbhole stock and XS steel front and ghost ring rear sights. The 18.5-inch Rem Choke barrel comes with two Trulock extended chokes– Boar Blaster and Turkey/Predator– to help pattern and the whole thing is set up in Kryptek Highlander. Aimed at outdoorsmen, this model is MSRP’d at $799.

Equipped with a pistol grip buttstock, the 870 DM Tactical uses an 18.5-inch barrel with an extended ported tactical choke and includes the same XS sighting as the Magpul and Tactical /Predator models. MSRP is $799.

For those who are concerned about the magazine capacity of their Tac-14 Shockwave firearm, the 870 DM variant gives the NFA-compliant 12-gauge a 6-shot detachable box to accent its 14-inch cylinder bore barrel. MSRP is $559. 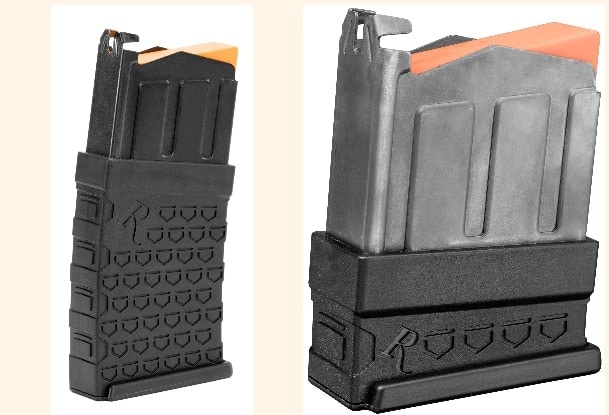 Each of the DM series 12 gauges with the exception of the Kryptek camo variant ship with a single 6-shot magazine, shown left. The hunting model ships with both the 6 and the 3, shown right.