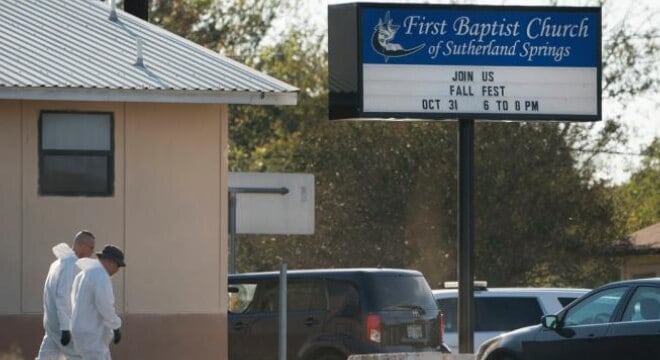 The shooting at Sutherland Springs last month resulted in 26 dead and another 20 injured while a neighbor, Stephen Willeford, responded to and exchanged fire with the shooter and was hailed for his actions. (Photo: Darren Abate/AP)

“The recent church shooting in Sutherland Springs was an immense tragedy, the likes of which I pray to never see again,” Patrick said in a statement released last week. “I know many are thankful for the Texan who stopped this attack through the exercise of his Second Amendment rights, but I believe our state laws provide more protection than many Texans realize. That’s why I asked the attorney general to clarify those laws for all Texans.”

The two-page letter fired off to Paxton seeks for him to explain to what extent those with handgun licenses can carry their guns on church grounds where a gun free zone is not posted and if churches who form their own voluntary security teams are exempt from the state’s initial $400 private security fee and subsequent renewals.

“Next legislative session, I will continue to support initiatives to clarify the law and protect gun rights in Texas,” Patrick said in the letter. “Meanwhile, I ask that you please expedite this request so that churches may know what legal options they have to improve their security.”

The shooting at Sutherland Springs last month resulted in 26 dead and another 20 injured while a neighbor, Stephen Willeford, responded to and exchanged fire with the shooter at the First Baptist Church and was hailed for his actions.

At the end of 2016, the Texas Department of Public Safety listed 1,150,754 million active license holders in the state, among the highest in the nation.