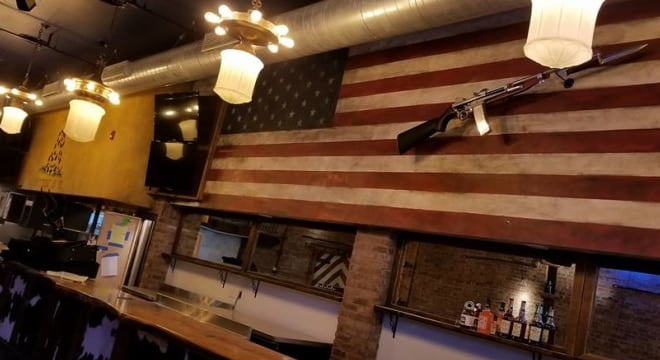 The decor at the Eagle Saloon includes what looks to be a vintage M1 Carbine training device and a Gadsden flag. (Photo: The Eagle Saloon)

Some in the Peekskill area are taking offense at the decor of a new bar that includes a number of American flags and a replica training rifle.

The Eagle Saloon in Northern Westchester has sparked complaints on a community Facebook group over its Gadsden flag and an oversized rifle mock-up complete with a bayonet, The Journal News reported.

“This needs to be fixed. Not a gun like that on the wall, not in this town,” said one woman, content not to just mind her own business. “In this era, semiautomatics are especially evocative of mass murder … this reeks too much of violent attacks on civilians. Just not a good idea to use it as decor.”

Restaurateur and self-described “avid gun rights guy” Louie Lanza defended the choice of wall art as a tribute to honor the military and law enforcement. He argued the pre-Independence banner was flown by Continental Marines, and the M1 Carbine is not real and its a double-sized training aid with cutaways to show the interior. Such outsized mock-ups were commonly used in the pre-PowerPoint military for instruction in weapons nomenclature and manipulation.

“Both these items represent to the owner the service and sacrifice of the men and women of our military, that have kept this country ‘free and independent,’ ever since the days of the American Revolution,” said a statement on the Eagle Saloon’s social media page. “Our owner is personally a staunch supporter of our military and law enforcement communities and the Eagle Saloon’s décor is meant in part to demonstrate this support.”

Both the post on the business’s page and one at The Journal News referencing the story have been bombarded with support for the tavern as of Wednesday.