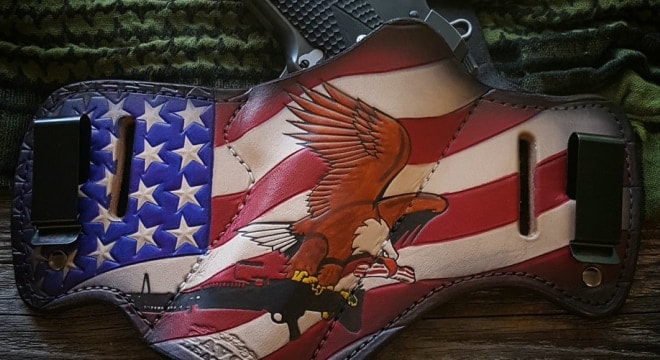 A move to sidestep a patchwork of reciprocity laws and agreements between states made it halfway through Congress on Wednesday carrying background check system fixes along for the ride.

The proposal, H.R.38, slid through the House on a Republican-heavy 231-198 roll call after a brief debate. Both parties saw defections with 14 Republicans– including the head of the Congressional Second Amendment Caucus, U.S. Rep. Thomas Massie of Kentucky– casting “no” votes while six Democrats jumped ship to support the bill.

“For the millions of law-abiding citizens who lawfully carry concealed to protect themselves, for conservatives who want to strengthen our Second Amendment rights, and for the overwhelming majority of Americans who support concealed carry reciprocity, Christmas came early,” said U.S. Rep. Hudson, the North Carolina Republican who sponsored the measure.

Hudson’s legislation allows law-abiding citizens to carry concealed only if they are not federally prohibited from possessing a firearm, are carrying a valid government-issued photo ID, and are lawfully licensed or entitled to carry a concealed handgun. As such it would circumvent the complex series of state and territorial reciprocity agreements that vary from one area to another, sometimes even within the same states.

The measure also included a host of carrot and stick incentives for federal agencies and states to step up reporting of prohibited firearms possessors to the FBI’s National Instant Criminal Background Check System while speeding up the appeals process for those denied a gun transfer, setting a 60-day window for the latter. The so-called FixNICS language soured the bill for some who support expanded concealed carry rights but were against coupling it with the background check measure. This stand was exemplified by the Libertarian-leaning Massie who publicly feuded with the National Rifle Association over the matter.

The gun rights group trumpeted the passage of the bill they termed a top legislative priority in recent years. “This vote marks a watershed moment for Second Amendment rights,” said Chris Cox, executive director of the NRA’s lobbying wing. “The Concealed Carry Reciprocity Act is the culmination of a 30-year movement recognizing the right of all law-abiding Americans to defend themselves, and their loved ones, including when they cross state lines.”

Gun control advocates, however, are ramping up a campaign to help bar the door to Senate passage on the expansion which they contend, along with top Congressional Democrats, is dangerous.

“House Republicans just ignored opposition from law enforcement and the public in order to eviscerate state gun laws and make it easy for people with dangerous histories and no training to carry hidden, loaded guns across the country,” said John Feinblatt, Everytown president. “We’ll hold those politicians accountable, just as we’ll hold accountable those who support this dangerous legislation as this fight moves to the Senate.”

Should reciprocity sweep Congress and be signed into law by President Donald Trump, both the Everytown group and Giffords have promised to meet the federal government in court over the expansion, using the argument that it would violate states’ rights protected by the Constitution.

“I think the structure of what this law will seek to do is unprecedented, and it’s also unconstitutional because it violates core principals of federalism,” said J. Adam Skaggs, chief counsel for the Giffords Law Center to Prevent Gun Violence.

The Senate reciprocity bill, S.446, has 39 co-sponsors, all from the GOP, and has been languishing in the chamber’s Committee on the Judiciary since February.