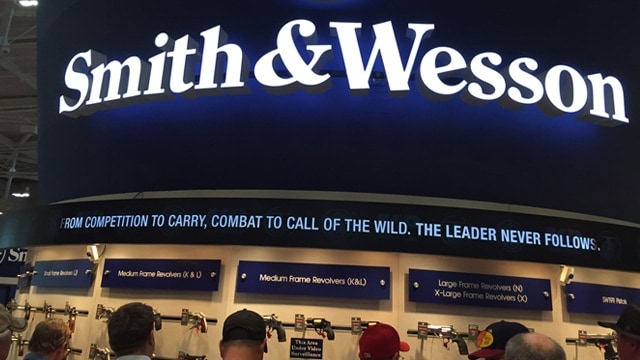 Sales for American Outdoor Brands are down again as the industry re-calibrates after 2016 — the biggest on record for estimated gun sales. (Photo: Daniel Terrill/Guns.com)

The sharp drop comes after company executives reported second quarter sales declined more than 36 percent over 2016. Forecasted annual sales shrank to $650 million — well below previous estimates of $740 million — according to AOBC’s financial records filed with the Securities and Exchange Commission.

Since the election, however, manufacturers and retailers alike have been struggling to define the “new normal” under a gun-friendly presidential administration and an apparent return to historical sales patterns.

“Our results for the second quarter were within our guidance range despite challenging market conditions,” said CEO James Debney in a press release Thursday. “Lower shipments in our Firearms business reflected a significant reduction in wholesaler and retailer orders versus the prior year, and were partially offset by higher revenue in our Outdoor Products & Accessories business.”

“For the second half of fiscal 2018, our focus remains on ensuring that our internal manufacturing resources are aligned with demand,” Debney said. “In addition, we intend to introduce several exciting new products, and execute on long-term organic growth initiatives that support our vision of being the leading provider of quality products for the shooting, hunting, and rugged outdoor enthusiast.”