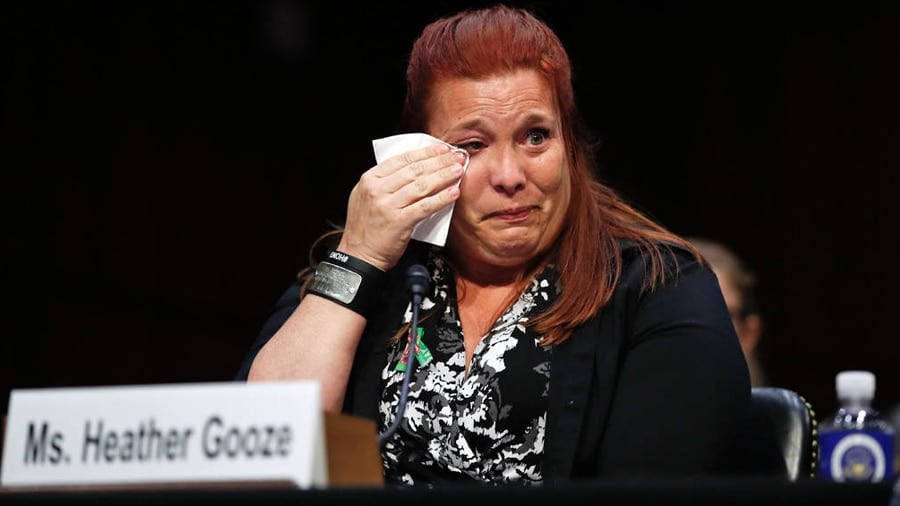 Heather Gooze, who worked as a bartender during the Las Vegas attack, helped carry the injured during the shooting. She held a man as he died. (Photo: Las Vegas Journal-Review)

The hearing was part of an evolving discussion about whether or not lawmakers should advance legislation to ban the device after a gunman used it to kill 58 people and injure some 550 others off the Las Vegas strip on Oct. 1. Using the device, he fired 1,100 rounds into a crowd of about 22,000 in 10 minutes.

Lawmakers on both sides of the aisle have found common ground in their interest to update federal law to prohibit bump fire devices alongside machine guns, but the focus during the hearing was a measure filed by Sen. Dianne Feinstein. The Bureau of Alcohol, Tobacco, Firearms, and Explosives launched a re-examination of federal law on Tuesday to determine if it does in fact permit the agency to regulate the device.

Acting ATF director Thomas Brandon explained to the committee the ATF’s authority is limited by the statutes that it’s authorized to enforce — mainly the National Firearms Act and the Gun Control Act — but they do not empower the agency to regulate gun parts or accessories.

Brandon added the agency can classify items rather than “approve” them when they’re voluntarily submitted by companies or individuals for review. “In making a classification, ATF determines only whether the device is a firearm, an NFA weapon, or a part or accessory that is not subject to ATF’s regulatory authority,” he said in his statement.

He clarified that the finding from the new review, under the directive of Attorney General Jeff Sessions, will be open for public commenting, as required by law for an agency trying to change its rules. The process will take several months, at least.

Members of the committee commented that the ATF’s effort would be a waste of time since many experts have already clarified that the law does not address bump fire devices. They argued the laws, written in 1934 and 1968, are antiquated and should be updated.

J. Thomas Manger, president of Major Cities Chiefs Association and the Chief of Police in Montgomery County, Maryland, said his organization “strongly supports” the proposal to ban bump stocks and other similar devices.

“The sole and pointless purpose of the bump stock is to accelerate the rate of fire to equal fully automatic firepower — exactly what Congress attempted to stop with previous legislation that bars fully automatic weapons,” Manger said in his prepared statement.

“How can this device be justified for sporting or hunting? The assailant in Las Vegas left 58 dead and over 546 injured within a 10-minute time frame. Major Cities Chiefs are calling upon Congress to act now and give to ATF the authority to stop the carnage which results from a military rate of fire,” he said.

Heather Gooze described her experience witnessing carnage and dodging gunfire during Las Vegas country music festival outside Mandalay Bay Casino and Hotel. She helped carry and treat the victims, and even waited beside one man as he died and hours after to ensure he was properly identified. Based on her account, she said bump stock devices “have no place in our general society.”

Attorneys Stephen Halbrook and Dave Kopel filed statements that aimed to narrow the language of the measure being considered regarding bump stocks.

Halbrook, who has represented both pro-gun organizations and manufacturers, called the language in the bill “disturbing” and argued that it would “ban any part that’s designed or functions to accelerate the rate of fire for a semiautomatic rifle.”

“The way (the bill is) written is it would violate the Second Amendment because it would ban commonly possessed semiautomatic rifles,” Halbrook said, adding the term “bump stock” is ambiguous, so legislators would need to be very clear in defining it in order to avoid prohibiting trigger upgrades and other common firearm components.

Kopel, a law professor and policy analyst at the libertarian think tank Cato Institute, clarified that a bump stock ban would not violate the Second Amendment because the Supreme Court ruled in the landmark Heller v DC decision — which defined the Second Amendment to include self-defense — that machine guns are not protected items.

“There’s been too much of an effort, I think, sometimes to conflate semiautomatics, which fire only one round when the trigger is pulled, with automatic guns, which fire continuously,” he said. “But bump stocks are something that takes things over the line and turns a normal gun into something that effectively fires as fast as a full automatic. So, legislation, which respects due process but restricts bump stocks would not violate the Second Amendment. And, I think would be reasonable.”

However, they both agreed that if a law were to pass, the government should allow for accommodations like grandfathering bump stock devices already in circulation or waiving current bump stock owners from regulation.