Mass AG: Reciprocity may be 'next deadly loophole in our nation’s gun laws' 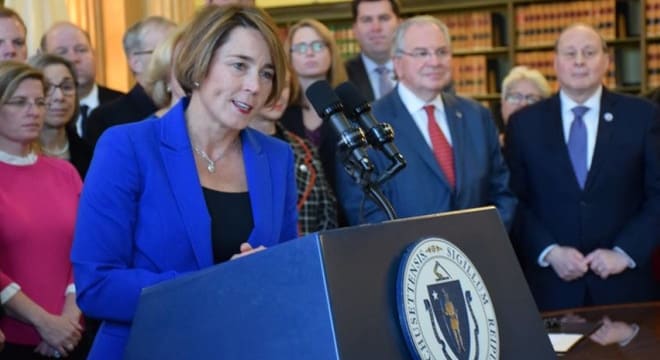 “In the aftermath of so many mass shootings, it would be tragic for this to become the next deadly loophole in our nation’s gun laws,” said Healey. (Photo: Attorney General Maura Healey’s office)

In a statement issued in conjunction with the Commonwealth’s district attorneys association and police chiefs lobby groups, Healey railed against this week’s successful vote in the U.S. House of Representatives on a measure that would force states to recognize valid concealed carry permits from other jurisdictions.

“In the aftermath of so many mass shootings, it would be tragic for this to become the next deadly loophole in our nation’s gun laws,” said Healey, a Democrat who has aggressively enforced the state’s gun laws in recent years. “This legislation is dangerous for the state of Massachusetts, our law enforcement officers, and our residents.”

In additional comments on social media, Healey warned that 12 states allow constitutional or permitless carry, and painted a picture of police placed in dangerous situations if the practice spills over into the state. Massachusetts borders two states, Vermont and New Hampshire, that do not require licenses for concealed carry.

“If concealed carry reciprocity becomes law, police officers on the beat would have to determine—often in an instant or under duress—whether an armed individual not permitted to carry a concealed weapon under Massachusetts law, may legally carry in the state in which he purports to be licensed,” said Healey.

Healey has been locked in a federal lawsuit with gun rights advocates and firearms trade industry groups over her 2016 interpretation of the state’s longstanding ban on “assault weapons” which eliminated a number of guns from the market that had been seen as in compliance with the law. She has also launched an investigation into the safety of guns made by Glock and teamed up with the Massachusetts Medical Society to provide voluntary guidance to healthcare professionals on the subject of talking to patients about firearms.

Healey is among 17 attorneys general from 16 states and the District of Columbia opposed to national reciprocity. Missouri Attorney General Josh Hawley last week joined 23 other states in support of the measure.