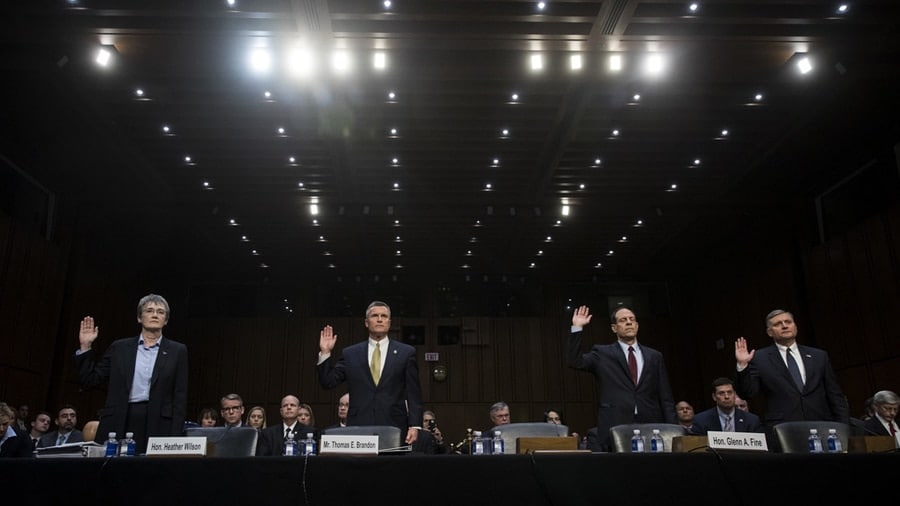 Officials from the Air Force, ATF, DoD and FBI testified in front of the Senate Judiciary Committee about improving NICS recordkeeping and bump stocks on Dec. 6, 2017. (Photo: Drew Angerer/Getty Images)

Fixing NICS became a congressional priority after a former Airman gunned down 26 people at a Texas church last month with a rifle his domestic assault convictions barred him from owning.

The breakdown in the background check system illuminated lackadaisical reporting practices in the U.S. Air Force and Department of Defense — a longstanding issue dating back two decades. A review of Department of Justice records in 1997 and 2015 found roughly one third of service members’ criminal convictions were missing from federal databases.

“At the end of 2007, federal agencies had submitted just over 4 million records to the NICS. By the end of 2016, that number had risen to nearly 8.5 million,” said Douglas Lindquist, assistant director of the FBI’s Criminal Justice Services Information Division. “While recent events have demonstrated that reporting is not perfect, the FBI is committed to working with all federal agencies to help them implement their existing record sharing plans – as it has since NICS’s inception.”

Likewise, he said, state agencies increased disqualifying record uploads by 600 percent over the last decade, with more than 7 million entries available as of 2016.

Despite this, dozens of states and federal agencies still don’t update the necessary databases feeding NICS — the Interstate Identification Index, the National Crime Information Center and the NICS Indices — punching gaping holes in the efficacy of the background check system and blinding dealers and the FBI as to the criminal history of potential buyers.

It’s exactly what happened — at least twice  — when 26-year-old Devin Patrick Kelley bought guns from dealers in Texas and Colorado, despite 2012 convictions for attacking his wife and infant stepson while serving at Holloman Air Force Base in New Mexico. Military officials court-martialed, jailed and discharged Kelley over the convictions, but never reported the information to the FBI.

Three years after his bad conduct discharge, Kelley murdered 26 people and wounded 20 others when he shot up the First Baptist Church in Sutherland Springs, Texas, on Nov. 5. Among the victims were nine members of the same family and a pregnant woman.

Glenn Fine, acting inspector general for the Department of Defense, offered a simple explanation for the system’s shortcomings — a widespread and well-known problem that previous audits have identified, with little to no improvements made.

“Inadequate training, inadequate verification,” Fine said. “They didn’t take these recommendations as seriously as they should have.”

Senators pressed the FBI and the Bureau of Alcohol, Tobacco, Firearms and Explosives on best way to punish federal agencies that still don’t comply, noting the Air Force’s intention to order disciplinary action for its own reporting failures.

“Can we agree that training is expensive but bad employees are more expensive?” he said Wednesday during a line of questioning directed toward Fine. “Here’s a radical thought. If you don’t do it, you’re fired. Because no one around here ever gets fired.”

“That’s what we are trying to do in our legislation,” Cornyn said. “Not only have the accountability and disciplinary consequences, but also we have the corresponding challenge of dealing with the state governments.”

“It seems to me there is no clearer cause and effect between tragedy and the potential prevention of that tragedy than improving the federal background check system, but as you’ve described it, it’s exceedingly complex,” he added. “We have to have some means of enforcing this.”