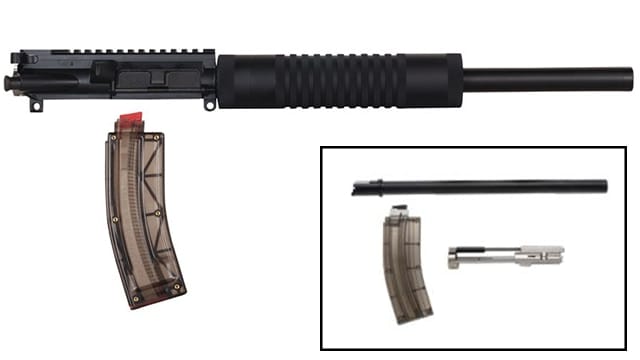 The AR-LT Bolt and Barrel Combo is the first time users will get access to the bolt and barrel without having to purchase the full AR-LT upper. (Photos: TacSol, Graphic: Jacki Billings)

Tactical Solutions rolls out a new combo kit, called the AR-LT Bolt and Barrel Combo, designed to covert an AR-15 upper to a .22 LR.

The combo boasts a lightweight construction aimed at allowing AR shooters the ability to practice more without the expense of centerfire ammunition. The AR-LT Bolt is a threaded number boasting a 0.920-inch diameter aluminum barrel with 1/2×28 pitch. Designed to work with most standard AR-15 uppers and handguards, the combo comes with a stainless steel bolt assembly.

TacSol says the AR-LT Bolt and Barrel Combo is a first for the company, who previously only offered the AR-LT set-up in a  complete rifle assembly.

“Our industry leading .22 long rifle AR Bolt and AR-LT Barrel have historically been sold only in a complete upper assembly,” TacSol CEO Darin Strickler said in a press release. “Tactical Solutions is excited to offer our customers an AR Bolt/AR-LT Barrel combination package. This will allow our customers a new option and greater flexibility in building their own light-weight, accurate .22 AR rifles.”

TacSol says the AR-LT Bolt and Barrel Combo is currently available through TacSol and RSR Distributors.