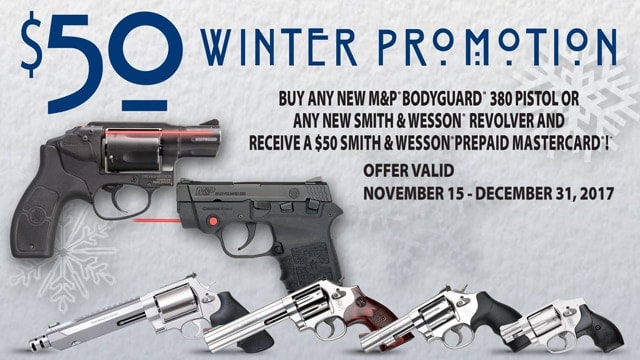 “This result reinforces arguably that firearms have moved even more strongly into the basket of Black Friday shopping goods that consumers have come to expect,” he said. “Accordingly, we believe promotions have, for the moment, replaced fair based buying as a primary driver for consumer purchases and the promotional environment for consumer firearms looks as though it will continue for the foreseeable future.”

“You can look at Black Friday NICS and say yes, that’s really encouraging, that’s a bright spot,” Debney said. “So the positive take from that is yes, there is still a consumer there that has an appetite to buy a firearm, but they’re willing to wait until they can get the best possible deal.”

“Our belief is … there was some fear-based buying that would take place from time to time and there is no fear-based buying right now,” he said. “We believe the level of promotional activity at the heightened level of it is has really replaced fear-based buying as the primary driver for a consumer who wants to acquire a firearm.”

Dealers processed more than 2.3 million applications through NICS in November — a 17 percent increase over October.

The strong sales data makes November this year’s second busiest for background checks so far. Last month’s sales trail 2016, the industry’s biggest on record, by 13 percent, though it still ranks as the second highest November in the background check system’s two-decade history.

“It’s going to be interesting as these promotions diminish, which they will overtime — they have to, they’re unsustainable — where do we settle out in terms of the size of the market,” Debney said. “And we just don’t know.”