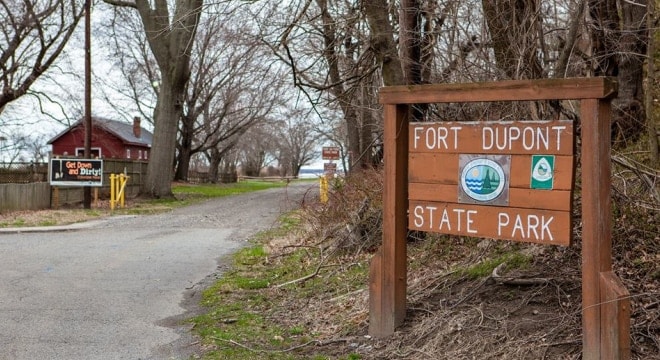 The 350 acres comprising Fort DuPont State Park are some of the 23,000 controlled by the Delaware Department of Natural Resources and Environmental Control. (Photo: DNREC)

The Delaware Supreme Court last week held that a prohibition on firearms on public land issued by two state agencies is unconstitutional.

The lawsuit, brought by several gun rights advocates and backed by the Bridgeville Rifle & Pistol Club and the Delaware State Sportsmen’s Association, argued the Delaware Departments of Agriculture and Natural Resources and Environmental Control exceeded their powers when they almost totally banned firearms on the land under their control. In a 3-2 ruling last Thursday, the state’s high court agreed.

“We are asked whether unelected officials from the State’s parks and forest departments, whose power is expressly limited, can ban (except for a narrow exception for hunting) the possession of guns in state parks and forests in contravention of Delawareans’ rights under the State’s constitution,” said Justice Karen Valihura for the majority. “Clearly they cannot. They lack such authority because they may not pass unconstitutional laws, and the regulations completely eviscerate a core right to keep and bear arms for defense of self and family outside the home — a right this Court has already recognized.”

DNREC, with some 23,000 acres under their control, had banned guns on their land since 1977 while the agriculture department, controlling 18,000 acres in three state forests, had maintained similar policies since 2003 with violations subject to fines ranging between $25 and $500.

“The limited ability to have a hunting rifle or shotgun while engaged in a controlled hunt on state park or forest land does not fulfill — and cannot substitute for — the people’s right to have a firearm for defense of self and family while camping overnight in a State Park or hiking in the more remote acres of State Forests (assuming compliance with all other laws governing guns),” said Valihura. “The Regulations not only unduly burden that constitutional right, but eviscerate it altogether.”

Plaintiffs in the case welcomed the news.

“They did the right thing,” said Jeff Hague, treasurer of the Bridgeville Rifle and Pistol Club and president of the Delaware State Sportsmen’s Association, as reported by DelawareOnline.com. “This reaffirms the constitutional right that Delawareans have … to self-defense and the right to keep and bear arms, not just in hunting and fishing and sporting, but in defense of their family and home.”

In a lengthy dissent penned by Chief Justice Leo Strine, the minority argued that the gun bans up for debate existed in one form or another on public land in the state back to the 19th Century and continued to operate without controversy. Further, Strine held the land affected only amounts to about 3 percent of the state and voiced concerns for public safety should guns be allowed.

“When people come together in Parks and Forests for games and recreation, emotions can run high,” he said. “When folks camp, they sometimes drink, including at events within the Parks like beer and wine festivals. When folks drink and carouse, they sometimes get jealous and angry.  When folks play or attend sporting events, spirits run high and sometimes out of control.  When folks get emotional around guns, things can get dangerous fast.”

Spokesmen for the two agencies said they are reviewing the ruling before they release a response.