Senate contest for seat from Alabama goes to polls 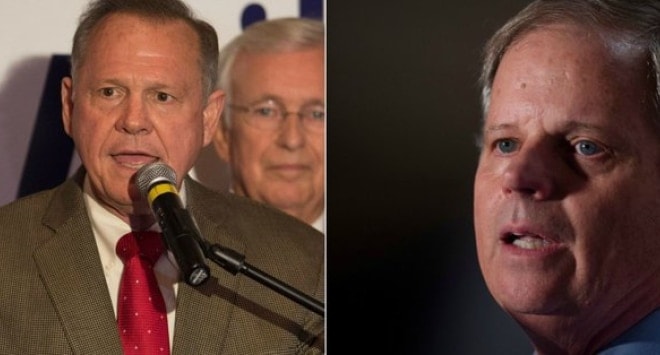 Democrat Doug Jones is facing off Tuesday against Republican Roy Moore for the seat left open by Jeff Sessions earlier this year.

Jones, a former federal prosecutor, has managed to whittle away Moore’s lead in the polls in recent weeks following the controversy surrounding the former Alabama Supreme Court Chief Justice and his alleged involvement with several women when they were teenagers. The Yellowhammer State’s electorate will decide if the seat, currently held by U.S. Sen. Luther Strange on appointment by the state’s Republican governor, will stay red or switch to the Democrats, a move which would whittle the current balance of power down between the GOP and Dems to a razor-thin 51 votes in the 100-seat chamber.

Moore has been outspoken in his support of conservative issues, and when questioned on gun rights, showed off a small revolver he produced from his pocket during a campaign stop earlier this summer. “I believe in the Second Amendment,” he said.

The Federal Election Commission holds that Jones has amassed a war chest of some $11 million which is over twice what Moore has raised. Though the National Rifle Association has not endorsed a candidate in the current contest — they previously supported Strange’s attempt to keep the seat before Moore bested him in the Republican primary — the group has spent about $1.2 million on ads directed against Jones. A smaller organization, the National Association for Gun Rights, has pumped about $30,000 to the race, including direct support for Moore.

While Jones omits direct talking points on gun politics from his official platform, he has said in interviews that he was in favor of stronger background checks and the “need to make sure we shore up” the NICS background check system. He also mocked Moore’s revolver display, saying “When you see me with a gun, I’ll be climbing in and out of a duck blind.”

Both candidates have seen a good deal of outside support, with Moore picking up endorsements from President Trump as former White House Chief Strategist Steve Bannon hit the campaign trail. Meanwhile, Jones has the backing of former Vice President Biden and retired basketball star, Charles Barkley.

Due to wildly diverse polling, poll watchers are calling the race a toss-up though Alabama has not sent a Democrat to the Senate since Howell Heflin retired in 1997.