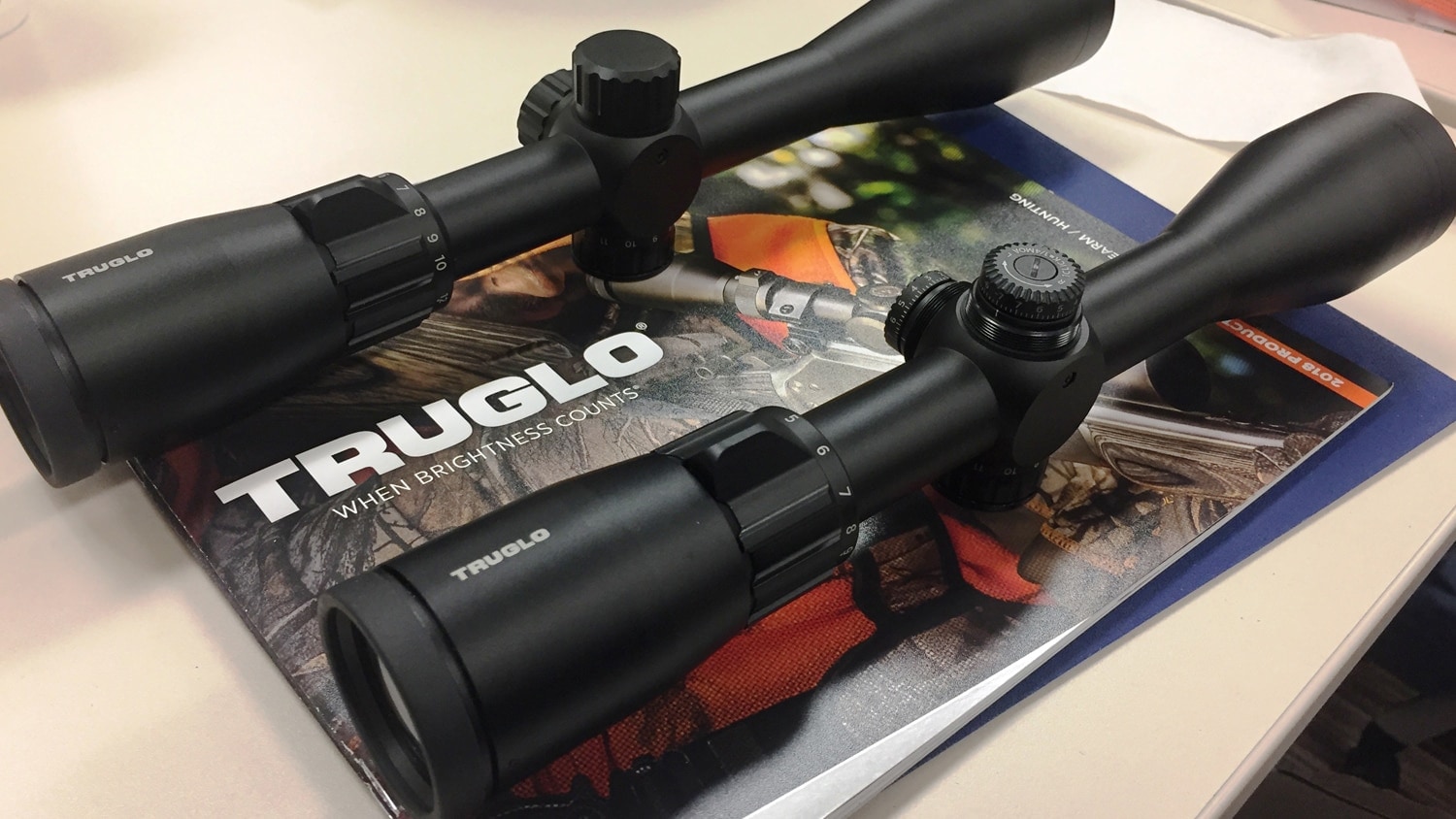 At the Blue August gun writers’ conference in Fort Worth earlier this year, the TruGlo company shared big news for hunters, pistol shooters and other customers.

TruGlo rep Pliny Gale prefaced education about upcoming and present products with a little backstory. TruGlo started as, and still is, a small family company, now 20 years old. “We started out with a question: how do I see my sights better?” Gale said.

In addition to the items named here, TruGlo is consistently evolving existing products, particularly titanium, fiber optic, and combination sights, in new formats in an attempt to meet consumer needs.

Truglo gave conference attendees its first public viewing of two new hunting scopes in its Intercept series. One has 3-9x magnification with a 42mm objective lens. The other is 4-12x with a 44mm lens. Both have a one-inch tube. Buyers can choose between two illuminated reticles, either a duplex or a BDC format. The finish on the monolithic aircraft-grade aluminum housing is anodized matte black. Windage and elevation adjust with quarter-MOA clicks, and the knobs have slippable caps to set the user’s zero to match the -0- marks on the turrets. The red illumination is powered by a provided CR2032 battery. The scopes are water and shock resistant, nitrogen gas-filled, have a fog-proof coating, and are covered by a limited lifetime warranty.

Both scopes are slated for release in February 2018. MSRP isn’t final yet, but if prices of TruGlo’s other battery-powered optics are an indication, consumers should expect prices around $200 per scope. “We recognize that coming up with something that’s the best of the best, but the average hunter can’t afford, is not what we want. We started with what the average hunter can spend on an optic, and built the best product we could for that amount,” Gale said.

Participants at the conference got to test the new scopes on a live fire range. The reticle adjustments feel solid enough for this price point. The illuminated reticles appeared more orange to this writer than red. Other reticle lines appeared clear. The scopes responded as they should to changes on the magnification and focus knobs. A TruGlo scope feature is a magnification adjustment collar with a shallow tread pattern and a wide, raised ridge for leverage. This should be a welcome feature for gloved hands in cold weather. 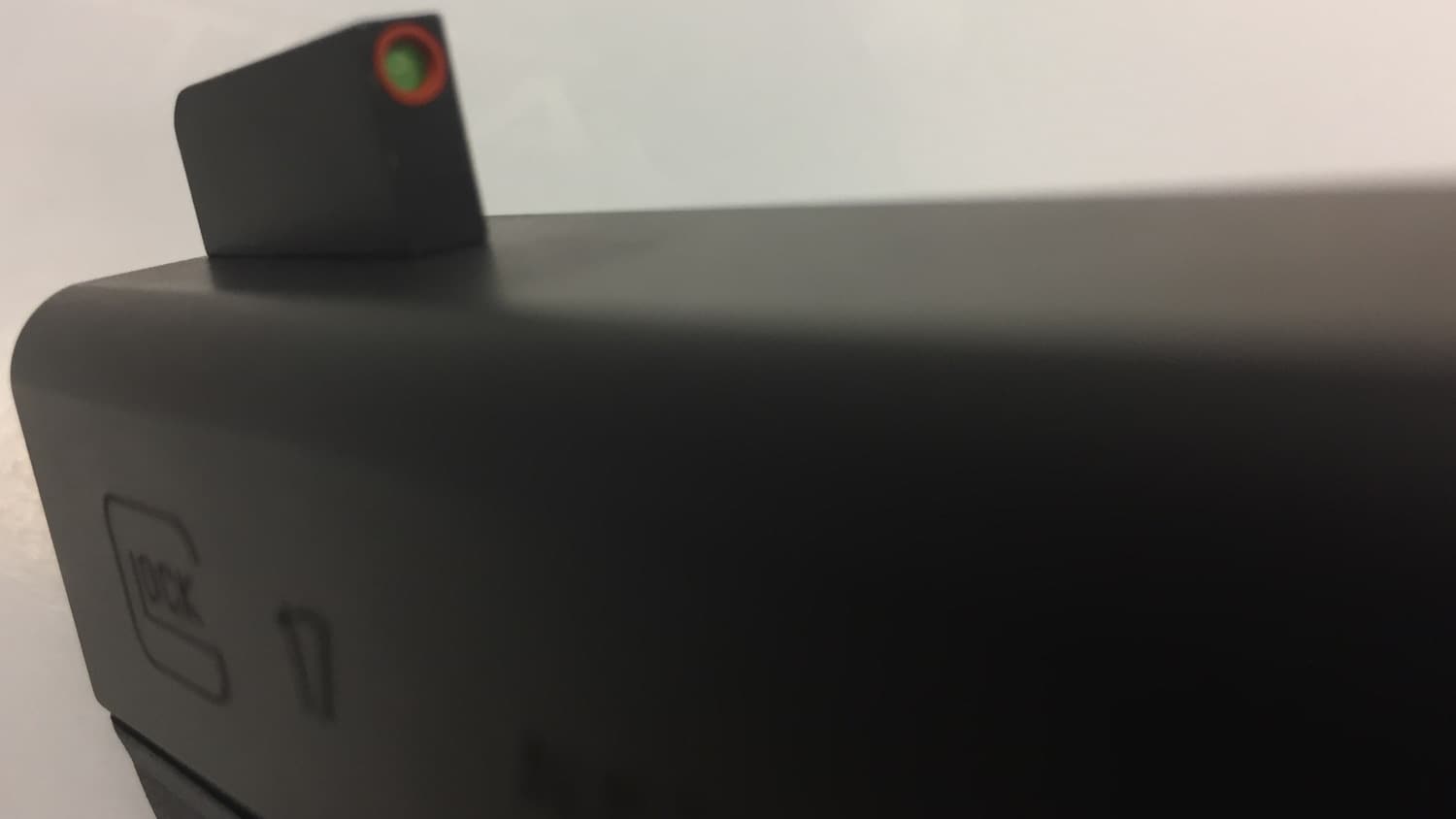 A new Truglo front sight fixed to a Glock pistol at the event in October. (Photo: Eve Flanigan)

If there was a common theme at the conference, it’s that manufacturers are doing their best to please the competition shooter. TruGlo’s new effort to this end is a new iteration of its TFX Pro sight series, which combines tritium and fiber optic materials for high visibility. The new TFX Pros have a prominent, but blacked-out rear sight and highly visible, tall front sight. The set is designed for fast acquisition and transitions on target. Their raised profile should also accommodate use with modern suppressors.

There is a limitation with the TFX Pro comp sights, but it’s temporary. When they’re released in the near future, they’ll only fit Glock pistols. One set will fit all Glocks except the 42 and 43. Pricing will be set in the $160 ballpark; less than other sights in the line as the plain black rear sight means less tritium to buy.

In hand, the rear sight is textured for a no-glare finish. I’ve never been a fan of plain sights, but I’ll be the first to admit these do invite rapid target acquisition, thanks to both the day-glow effect on the front sight, wide gap in the rear sight blade, and prominence of both. This writer has had more than one set of the company’s tritium-only sights. They have been very durable. Though the long front sight has been criticized as potentially easy to unseat under direct pressure.as compared to a tower-like shape, the sights have stayed solid. It took about 10 years for the tritium on the original set to stop glowing. They’re still usable sights without the glow.

A glowing rebate on handgun sights

TruGlo currently offers a rebate of $20, $15, or $10 for handgun sight products purchased from authorized dealers. Handguns needing an upgrade can get a big one this way, at an affordable price. Better visibility of sights, especially in dimly lit conditions, increases ease of initial aim and keeping sights on target—both of which are beneficial for competitive or defensive shooting. Check out the TruGlo website for details.