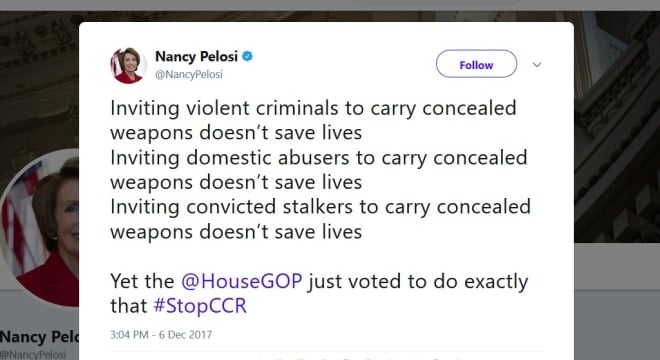 Pelosi, a California Democrat, warned on social media last week following approval in the House of a measure to enforce recognition of concealed carry rights across state lines that Republican lawmakers had opened a proverbial Pandora’s box.

Drew Hammill, a Pelosi spokesman, stood by her comments and told the fact checkers that her tweet was based on information provided by Everytown, while the bill’s sponsor, U.S. Rep. Richard Hudson, R-N.C., painted the statement as “a complete falsehood” pointing to the fact that his legislation excluded those prohibited by federal law from possessing a firearm.

Digging deeper into the issue, the Post evaluated commentary on the subject from attorney and legal scholar David Kopel as well as UCLA law professor Adam Winkler and others.

“We wavered between Two and Three Pinocchios but ultimately settled on Three because her last line — ‘the @HouseGOP just voted to do exactly that’ — is so over the top and exaggerated,” said the fact checker. “One can have a respectful political debate, raising the issue of a lower common denominator for concealed-weapons permits, without accusing the other side of voting to let violent criminals and stalkers have guns.”

The paper describes such as rating as being reserved for instances where they found “Significant factual error and/or obvious contradictions. This gets into the realm of ‘mostly false.’ But it could include statements which are technically correct (such as based on official government data) but are so taken out of context as to be very misleading.”