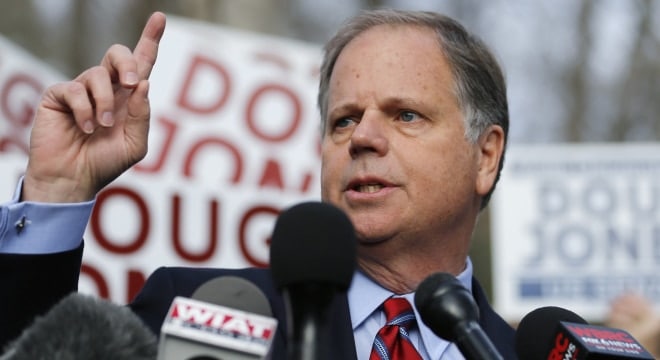 Former federal prosecutor Doug Jones ended up on top of the vote after Tuesday’s special election in Alabama for the open U.S. Senate seat from the state. (Photo: AL.com)

A special election to fill Attorney General Jeff Sessions’ former seat in the U.S. Senate until 2021 unexpectedly went to the Democrats, to the joy of those seeking stronger gun laws.

When Jones takes office, providing outstanding votes don’t tip the final tally in Moore’s favor, the GOP will control 51 of 100 seats in the Senate. This means Republicans will have that much more pressure to both unite their party as a block and stave off Democrat filibusters on partisan legislation such as national concealed carry reciprocity which currently had 39 co-sponsors in the chamber including sitting U.S. Senator Luther Strange, appointed to temporarily fill the seat earlier this year by Alabama’s governor. Another bill that has seen more support in the House, the Hearing Protection Act, only has 18 Senate sponsors, again counting Strange.

“We congratulate Senator-elect Doug Jones on running a hard-fought race that focused on lifting people up instead of bringing them down,” said Peter Ambler, executive director of Giffords. “Throughout his career Jones has sought justice for those who have not received it and will continue that effort in the United State Senate… We look forward to working with him to keep our communities safe by confronting the gun violence epidemic devastating our country.”

The Alabama chapter of Moms Demand Action this week also commented on the race, saying “We’re putting Washington on notice: If you stand with the gun lobby and against public safety, we will use our grassroots power to vote you out of office,” using the #StopCCR hashtag circulated in an effort to call attention to national reciprocity legislation.

Shannon Watts, the founder of the group, called out the National Rifle Association, who spent just over $1 million in Alabama this year in support of Strange and against Jones, saying, “Hey @NRA – It’s probably too soon to discuss #DougJones win, so we’ll just send you thoughts and prayers.”

President Trump congratulated Jones on his win, but cautioned he may not have a long career in the Senate, hailing from a deep-red state that hasn’t sent a Democrat to the body since 1997.

“Congratulations to Doug Jones on a hard-fought victory,” said Trump, who backed first Strange then Moore after the former was defeated in the GOP primary. “The write-in votes played a very big factor, but a win is a win. The people of Alabama are great, and the Republicans will have another shot at this seat in a very short period of time. It never ends!”