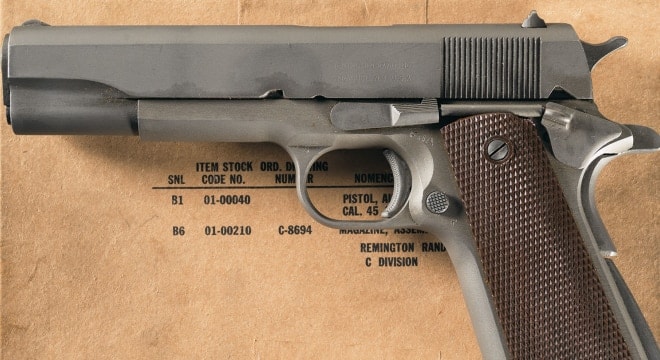 A Remington-Rand M1911A1 pistol made during WWII for military contract. The company made over 850,000 guns for the War Department during WWII, more than any other contractor. (Photo: Rock Island Auctions)

Added as an amendment from U.S. Rep. Mike Rogers, R-Ala., while the NDAA was in debate in the House Armed Service Committee, it would speed up the transfer of potentially the largest remaining stock of military surplus World War II-era handguns in government hands to the public. The mammoth legislation, which outlines $700 billion in overall defense spending, passed the Senate by voice vote — not a single Democrat opposed it — and was signed by the President in a ceremony at the White House this week.

“I was proud to see the National Defense Authorization Act for FY18 become law today with President Trump’s signature,” Rogers said in a statement. “This critical piece of legislation funds the Pentagon, takes care of our brave men and women in uniform and helps the Anniston Army Depot. This legislation also includes the transfer of 1911s to the Civilian Marksmanship Program (CMP) so they can prepare and sell the firearms to law-abiding citizens.”

On the handguns headed to the CMP, the NDAA instructs the Secretary of the Army to conduct a two-year pilot program that will transfer “not less than 8,000 surplus caliber .45 M1911/M1911A1 pistols” in 2018 with a cap of no more than 10,000 transferred per fiscal year. The program would then be reviewed to ensure the guns were sold by CMP in accordance with applicable federal laws and evaluate its cost to the Army.

In 2015, President Obama signed the FY16 spending bill into law, which authorized the Army to send up to 10,000 of their estimated 100,000 surplus 1911s to the CMP during a one-year pilot program, though none were transferred.

The National Rifle Association welcomed the news from Washington that the vintage guns will soon be released rather than melted down.

“With President Trump’s signature, thousands of surplus 1911 pistols will become available for sale to the American public through the Civilian Marksmanship Program,” said Chris W. Cox, head of the NRA’s lobbying arm. “These firearms are currently sitting in storage awaiting destruction at taxpayer expense.”

The CMP, which has established a dedicated webpage for the new 1911 program, said Tuesday they aren’t out to rip anyone off on the guns.

“CMP has been selling M1 Garands, M1 Carbines, 1903s, .22s, etc. for 21+ years and we have never taken advantage of anyone,” said Mark Johnson, the chief operating officer of the federally-chartered non-profit. “CMP is not going to start price gouging people now with the 1911s. The 1911s will be priced at fair market value just like our M1 Garands. The CMP’s enabling legislation directs sales of items at fair market value.”

For comparison, “field grade” M1 Garands are currently listed for sale by the group for $630 with “service grade” examples for $730, which is generally a good bit less than the current asking prices on Gunbroker.