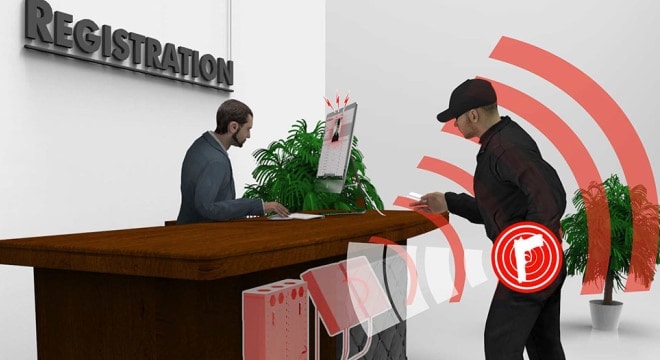 The Westgate Las Vegas Resort & Casino is testing a radar system that can reportedly identify a gun at about six feet (Image: Patriot 1)

The Westgate Las Vegas Resort and Casino is now trying out the Patscan radar system. Billed as a “covert primary radar screening device and software solution for the detection of on-body concealed weapons at key access points of weapons-restricted buildings and facilities,” those at the Westgate like the fact that it is out of sight, and that it can give them tips on who is armed and not.

“I believe in people’s right to bear arms,” Mark Waltrip, Westgate Resort’s chief operating officer, says. “I have a concealed carry permit myself. But, you know, on our properties, we want to maintain a safe environment, and we don’t need guests bringing weapons on site. We really don’t want that kind of surprise.”

Produced by Patriot 1, a Canadian-based security company, the Patscan needs to be within about six feet of the weapon to image it, though they point out that multiple units can be arranged to blanket entry points, reservation desks and exits — areas where visitors are channeled through.

For now, the Westgate is trialing the Patscan at the resort’s employee entrance for the next several months before making a decision moving forward. The historic resort and casino, known for many years as the Las Vegas Hilton, has over 3,000 rooms and sits astride the Las Vegas Convention Center about a block from the Strip.

The Shooting, Hunting, Outdoor Trade Show, an annual event for the firearms industry and mecca for all that is gun has been held in Las Vegas at the Sands Expo and Convention Center every January since 2010, and last year drew a crowd estimated to top 65,000.