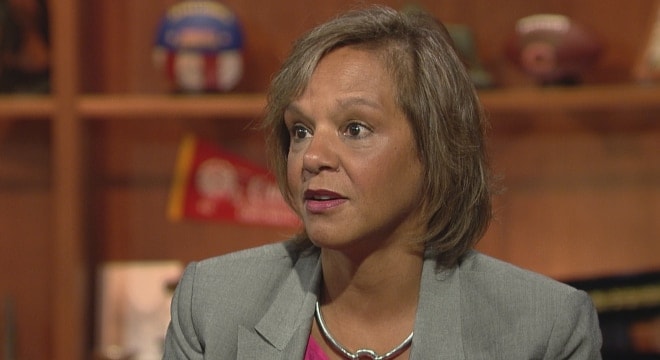 U.S. Rep. Robin Kelly, an Illinois Democrat, is backing a measure to modify the Dickey Amendment, which prohibits the use of funding at the Department of Health and Human Services to advocate gun control. (Photo: WTTW)

A group of House Democrats on Wednesday urged the chamber’s leaders to end a longstanding ban through the Dickey Amendments on federal funding for gun research study as a health care issue.

The lawmakers sent a letter – signed by Rep. David Price, D-N.C., and others – addressed to Reps. Paul Ryan and Nancy Pelosi calling for an end to the defunding of the Centers for Disease Control on the issue.

“Although Members of Congress may disagree about how best to respond to the high incidence of gun violence, we should all be able to agree that our response should be informed by sound scientific evidence,” says the letter in part, urging House leaders to oppose traditional language in the final fiscal year 2018 appropriations package barring use federal funds for research directed at gun control.

Named for former U.S. House Rep. Jay Dickey, an Arkansas Republican who backed the measure in 1996, the amendment stripped the CDC of $2.6 million it had been using on its gun violence research and has been a contentious matter ever since.

“For decades, the Dickey Amendment has silenced lifesaving research and suppressed the policy dialogue around common sense laws that can save American lives,” said U.S. Rep. Robin Kelly, D-Ill., who is sponsoring a measure to remove the teeth from the ban and clarify that funds may be used to study gun violence. “It’s time to let the science and research speak for itself so policymakers can enact the best policies to protect public safety and American families.”

Last year, Kelly signed a letter similar to the one sent this week, referring to the issue at the time as a public health epidemic. That call had 146 backers. Gun rights advocates argue Dickey’s legislation has been badly mischaracterized.

“There is nothing in the Dickey Amendment that prevents CDC from doing research. All the Dickey Amendment does is restrict CDC from engaging in advocacy,” Larry Keane, general counsel for the National Shooting Sports Foundation, told Guns.com previously. “However, some of what has been talked about over the years as ‘research’ has been pretty much undisguised up-front advocacy in search of supporting data.”

Yet, before his death earlier this year, Dickey had led a campaign to restore funding for the research, saying that he thought his measure had been used to discourage researchers from studying gun violence.

Kelly’s bill has 22 co-sponsors, all Democrat, and has been referred to the House Energy and Commerce Committee.