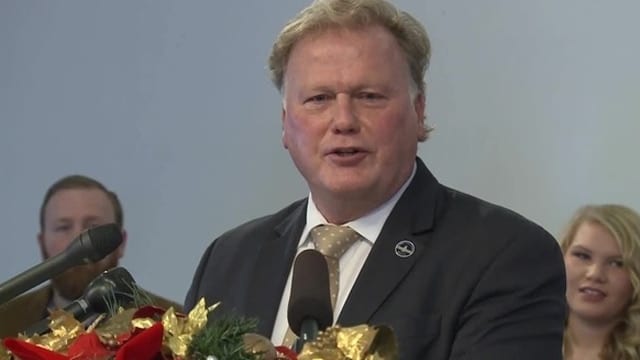 Kentucky state Rep. Dan Johnson, who had built a reputation for himself as a gun-toting, motorcycle-riding preacher, committed suicide on Wednesday following allegations that he molested an underage girl and other crimes.

Details of Johnson’s alleged misbehavior were uncovered by the Kentucky Center for Investigative Reporting, a Louisville-based journalism non-profit, in an exposé called The Pope’s Long Con. The report detailed Johnson as embroiled in a web of lies and deceit and described his role in a mysterious fire and the sexual misconduct.

According to the report, Johnson allegedly molested a 17-year-old girl staying at a living area of the Heart of Fire City Church where he was a pastor. The teen told authorities that he approached her on New Year’s Eve in 2012 while she slept. He was drunk, started to kiss her and fondled her under her clothes.

Although police did not charge him with a crime after the teen reported it in 2013, they re-opened an investigation into the matter on Tuesday. Following the news, the Republican Party of Kentucky and leaders of the House Republican Caucus called for Johnson to resign. Despite the calls, Johnson held a press conference where he refused to step down and then dismissed the report as “fake news” in a suicide note posted to Facebook.

Deputies with the Bullitt County Sheriff’s Office found Johnson’s body in front of his car on the bridge where he had killed himself. The county coroner determined Johnson died of a self-inflicted gunshot wound to the head.

The news report raised doubt about Johnson’s personal history such as documents claiming he performed miracles on mission trips, set up safe zones during the 1992 LA riots, served as chaplain in the White House under Presidents Bill Clinton and George W. Bush, and served as an ambassador to the United Nations. He boasted about these acts during his campaign last year, but no record or person could corroborate his story.

The report also cast doubt on Johnson’s claim that he witnessed the 9/11 attacks in New York, served as a clergy following the chaos and set up morgues in the rubble. To support his story, Johnson shared an image of him posing with then Mayor Rudy Giuliani at ground zero and state records listing him as receiving New York workers’ compensation. Yet, city officials and public documents failed to support his narrative.

Johnson shared details about his history with Guns.com in brief interviews and even appeared in the book We The People. In June 2016, Guns.com published his famous “gun choir” in a video in which he sang Amazing Grace with members of his congregation while sporting pistols and rifles.

Michael Skoler, the president of Louisville Public Media, which owns the Kentucky Center for Investigative Reporting, released a statement saying how sorry they were to hear of Johnson’s death. He defended his center’s article: “Our aim, as always, is to provide the public with fact-based, unbiased reporting and hold public officials accountable for their actions.”

“As part of our process, we reached out to Representative Johnson numerous times over the course of a seven-month investigation. He declined requests to talk about our findings,” Skoler continued.

Johnson’s wife, Rebecca Johnson, announced that she would campaign to replace him in the state legislature. She referred to her husband’s death as a “high-tech lynching based on lies and half-truths.”

Ben Philippi contributed to the reporting of this article