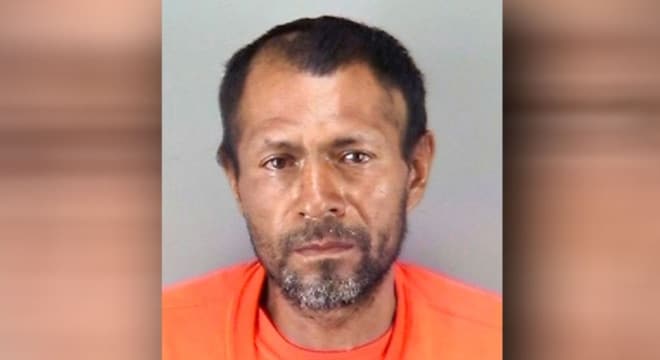 Jose Ines Garcia Zarate, seen above in an undated booking photo, was acquitted of murder charges by a California jury in a state court last month but is facing sentencing on a weapons violation. (Photo: San Francisco Police Department)

Defense lawyers for Mexican national Jose Ines Garcia Zarate on Thursday moved to throw out his gun possession conviction, which, if successful, would free him from prison.

Garcia Zarate’s legal team is contesting his conviction on a charge of unlawful possession of a firearm by a felon, which carries up to three years in prison under California law, The Mercury News reported. His attorneys argue the judge did not allow the jury in his trial last month to consider a claim that the man, with at least seven felonies and five deportations under his belt, didn’t realize he was holding a gun until it fired.

The handgun which killed Kate Steinle in July 2015 was stolen from a federal agent and found by Garcia Zarate under the bench of a pier wrapped in a shirt. His attorneys argued he did not know it was a gun when he picked it up and threw it in the Bay after it fired. Ballistics experts in the case characterized the shooting an accident as the bullet that Garcia Zarate fired ricocheted off the pavement away from him before traveling another 75 feet and striking Steinle.

Should the judge not toss the conviction, for which Garcia Zarate is set to be scheduled for next month, his lead attorney says he will file an appeal in the case.

Regardless, federal gun possession charges are pending against Garcia Zarate as well.

Steinle’s family is currently part of a lawsuit cleared to proceed earlier this year by the courts against the federal government over the handgun.  In the case, a judge held that leaving a loaded gun in a backpack visible on the seat of an unattended vehicle in a high-crime area of San Francisco by the agent created a foreseeable risk of harm.