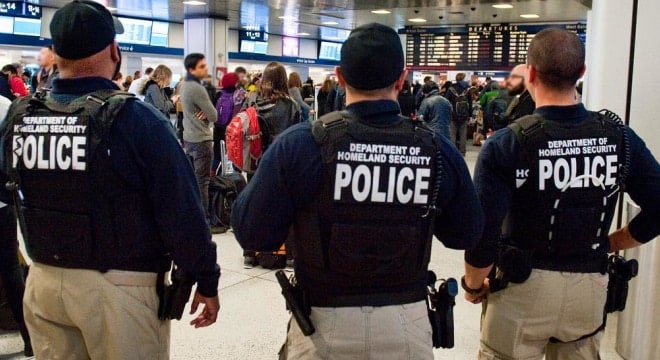 In October, the Department of Homeland Security’s Office of Inspector General disclosed that between 2014 and 2016, DHS lost 228 firearms, 1,889 badges, and 25 secure immigration stamps. (Photo: DHS)

A measure backed by a California Democrat would see tighter regulation on how the Department of Homeland Security tracks and manages its more sensitive items.

The Securing DHS Firearms Act of 2017, filed as H.R. 4433, was reported out of committee by unanimous consent last week and could get a floor vote sometime this month. Backers of the move argue it is needed after an audit found that hundreds of guns and other controlled items were missing from the armories of the nation’s largest law enforcement body.

“It was troubling,” said U.S. Rep. Luis Correa, D-Calif. “You’ve got to come up with a process to secure these items. You never leave it unattended. You always secure it. That badge. That gun. That laptop.”

Correa’s bill would officially task the Under Secretary of Homeland Security for Management with the duty of tracking the cabinet-level department’s firearms and other sensitive assets. It directs the establishment of guidelines for securing Department-issued firearms and items such as badges and computers, as well as setting a recordkeeping requirement with a strict timeline for reporting missing weapons and equipment. It would also mandate continuous training in the procedures and “an enforcement mechanism” to ensure supervisors are on top of compliance.

In October, the Department of Homeland Security’s Office of Inspector General disclosed that between 2014 and 2016, DHS lost 228 firearms, 1,889 badges, and 25 secure immigration stamps.

With over 250,000 guns in the inventory of components as diverse as Customs and Border Protection, ICE, the Coast Guard and the Secret Service, the report found that in many cases the firearms that are unaccounted for came after officers either disregarded policy or used poor judgment.

The OIG found that of the 65 cases in which guns were lost due to poor safeguarding by those trusted with them, 22 officers did not receive any disciplinary action while nine who did only received an oral counseling. Further, none were given remedial training after the fact.