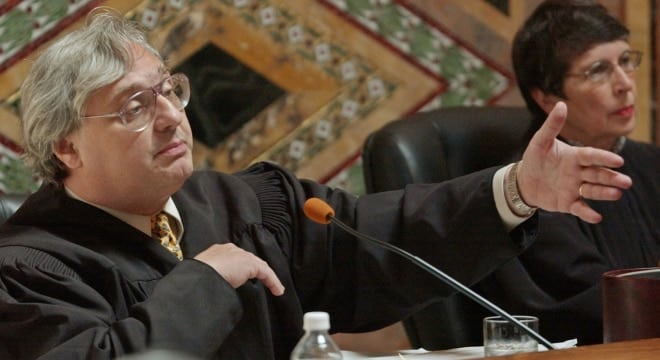 Judge Alex Kozinski of the U.S. Court of Appeals for the 9th Circuit, pictured in 2003. (Photo: Paul Sakuma/AP)

One of the few seemingly pro-Second Amendment judges on the West Coast federal appeals court has announced his retirement effective immediately.

Judge Alex Kozinski, 67, a UCLA Law graduate nominated to the bench by Ronald Reagan in 1985, left the U.S. 9th Circuit Court of Appeals Monday after a growing number of reports about improper sexual conduct. He was one of just seven active appointments by a Republican president to the super-sized 29-judge court which hears federal appeals from nine Western states, including California.

While on the bench, Kozinski took part in a number of landmark cases, served as Chief Judge of the 9th Circuit from 2007 to 2014, and was known as a feeder judge for clerks to the Supreme Court. He also weighed in on several gun rights cases.

Nearly 15 years ago, Kozinski penned in a lengthy dissent in the case of Silveria vs. Lockyer, which challenged the constitutionality of California’s Roberti-Roos Assault Weapons Control Act expansions. The case, which went on to the Supreme Court where it was rejected though later overruled by the Heller decision, was upheld by a panel from the 9th Circuit in favor of the state who argued the Second Amendment did not protect an individual right to keep and bear arms. To this concept, Kozinski weighed in.

The majority falls prey to the delusion—popular in some circles—that ordinary people are too careless and stupid to own guns, and we would be far better off leaving all weapons in the hands of professionals on the government payroll. But the simple truth—born of experience—is that tyranny thrives best where government need not fear the wrath of an armed people.

In that case, Kozinksi, born in Communist-controlled Romania to a pair of Holocaust survivors, invoked images of Hitler, Pol Pot, and Stalin, as gun control champions.

All too many of the other great tragedies of history — Stalin’s atrocities, the killing fields of Cambodia, the Holocaust, to name but a few — were perpetrated by armed troops against unarmed populations. Many could well have been avoided or mitigated, had the perpetrators known their intended victims were equipped with a rifle and twenty bullets apiece, as the Militia Act required here…If a few hundred Jewish fighters in the Warsaw Ghetto could hold off the Wehrmacht for almost a month with only a handful of weapons, six million Jews armed with rifles could not so easily have been herded into cattle cars.

In the same dissent, Kozinski railed against the country’s history with disarming slaves and free blacks alike in the antebellum South through institutionalized gun bans without due process.

In  Florida, patrols searched blacks’ homes for weapons, confiscated those found and punished their owners without judicial process… In the North, by contrast, blacks exercised their right to bear arms to defend against racial mob violence…A revolt by Nat Turner and a few dozen other armed blacks could be put down without much difficulty; one by four million armed blacks would have meant big trouble.

More recently, Kozinski, while chief judge of the court, wrote a dissenting opinion in the case of a convicted Arizona murderer over the use of lethal injection. The jurist argued the method was “misguided” and contended that more primitive but foolproof means of execution — such as firing squads — should be considered preferable.

“Sure, firing squads can be messy, but if we are willing to carry out executions, we should not shield ourselves from the reality that we are shedding human blood,” said Kozinski.

In a case this year which upheld a Hawaii police department’s decision to ban a man convicted of misdemeanor harassment 20 years ago from owning firearms, Kozinski sided with the state but noted it offered a “notably slender” path to Second Amendment rights’ restoration.

He was not a member of the panel who decided the historic reversals of lower court rulings issued by the circuit which found that, in both cases, California sheriffs used unconstitutional policies to limit the right to carry under the Second Amendment.

Kozinski’s seat would be filled by a yet to be announced nominee by President Trump. Another Trump nominee to an open 9th Circuit spot, Ryan Bounds, to the bench vacated by Reagan-appointee Judge Diarmuid O’Scannlain, is currently pending before the Senate Judiciary Committee.