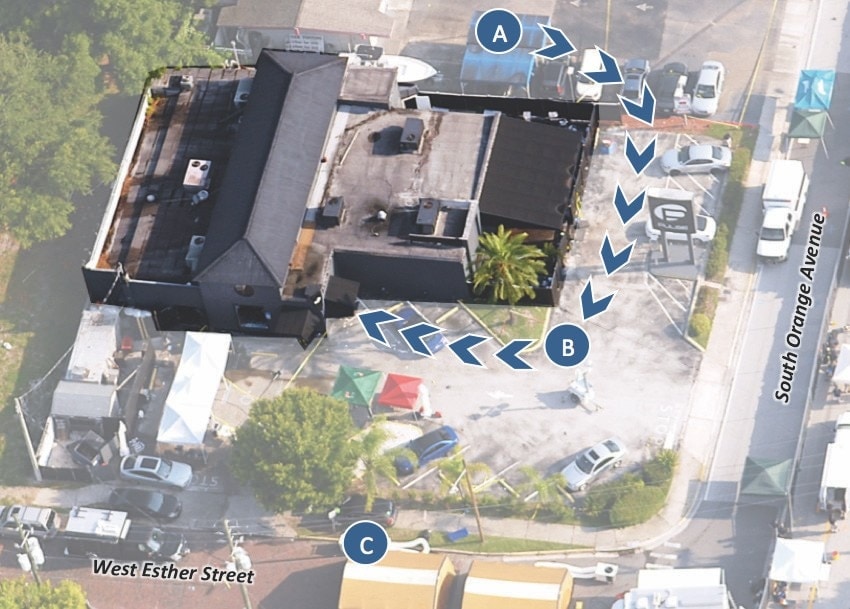 A graphic showing the subject’s path (B) into the nightclub from his vehicle and the location of the Orlando Police detective (C) who first returned fire. (Photo: DOJ)

The Department of Justice on Monday released a review of the Orlando public safety response to last year’s terrorist attack on the Pulse nightclub.

Compiled by DOJ’s Office of Community Oriented Policing Services in partnership with the Police Foundation, the in-depth review performed at the request of the Orlando Police Department goes into detail on all aspects of the 2016 attack which left 49 people dead and more than 100 others injured.

In its conclusions, the 198-page report found Orlando’s tactical response was consistent with the agency’s policies as well as standard practices and, following the end of the active shooter event, the agency leveraged their relationship with the community to help cope with the aftermath left behind.

“Not only will this review be a valuable resource to the Orlando Police Department, but also to the thousands of law enforcement and public safety agencies across the nation who must prepare to face increasing acts of mass public violence and the growing threat of terrorism,” said Russ Washington, acting director of DOJ’s COPS Office.

In the first, the 15-minute active shooter phase, the report describes how the shooter entered the 4,500-square foot gay club on Latin Night and, with the music blaring, began shooting at the estimated 300 patrons gathered.

“Some rounds struck the first victims at close range; other rounds ricocheted off the cinderblock and stucco walls, the reception desk, and the chandelier, pockmarking the walls and hitting victims,” the report says, explaining that some thought the sound of gunfire was an effect used by the DJ or a wiring problem with the speakers.

Just two minutes into the shooting, an Orlando Police detective working outside the club as security saw the suspect firing at a pair of fleeing patrons with a rifle and returned fire with his Sig P226 pistol, calling for back-up over the radio, adding to a chorus of 911 calls placed from those on the scene.

By 2:06 a.m., three additional Orlando officers arrived on scene, formed a contact team with the detective in the parking lot, then two minutes later entered the club to start rescuing people while a second contact team formed from other responding officers from several departments.

Once inside, officers found an “eerie quiet” as they tried to locate the subject, who the second contact team later located in a restroom area with hostages after he stopped firing.

“According to officers who entered the building, what they saw in the largest room of the club was a scene unlike any they had ever seen before,” the review says. “Bodies were piled up on the stage and across the dance floor; individuals with devastating wounds and deceased victims were everywhere. A disco ball and colored lights were the only source of light in the otherwise dark room.”

Once barricaded with hostages, the second phase of the event lasted about 20 minutes as additional responding officers and deputies evacuated those who had taken refuge in a second restroom and triaged others found injured from the building.

“One officer, responding to the number of severely wounded or deceased victims, told survivors, ‘If you’re alive, raise your hand,’ as he continued to rescue survivors,” the report says. Between 20 and 25 who were pulled out were transported to an area trauma center in the vehicles of responding officers.

The third phase, labeled in the review as “Terrorism in Orlando” took place over an hour and began at 2:35 a.m. when the suspect called 911 dispatchers and, speaking first in Arabic and then switching to English, said he was the shooter and later, to an area cable news station “I did it for ISIS.”

As negotiators spoke on and off with the subject and sent in a small tactical robot to inspect the scene, explosives-detecting dogs were brought in to sniff out potential IEDs and car bombs due to the likelihood a device had been laid to go off, targeting the growing crowd of first responders. In all, the subject spoke to authorities four times by phone for a total of 29 minutes, reiterating his terror pledge.

Within the first three hours, approximately 300 local law enforcement officers from across the county were on scene. Over the course of the event, at least 90 patrons who were injured or hiding were rescued by responding officers.

“Y’all is gonna shoot his [expletive]?” a bystander asked an officer outside the club during the stand-off, as captured by a body cam.

“We can’t, ma’am,” answered the officer.

“We can’t; there’s more victims in there. If we started to shoot, we might shoot other people.”

“[Expletive] go in there and shoot his [expletive], man.”

The final phase, where the incident came to an end, occurred from 4:45 to 5:15 a.m., and was kicked off by an explosive breach of the club’s west wall to gain access to the hostages. When the breach proved too small for officers to enter, an armored Bearcat vehicle equipped with a ram made a series of holes in the wall and, when a SWAT officer was attempting to widen one, he came under fire from the subject. Replying with flash-bang grenades, the group fell back before a second gunfight at 5:15 resulted in the subject’s death. 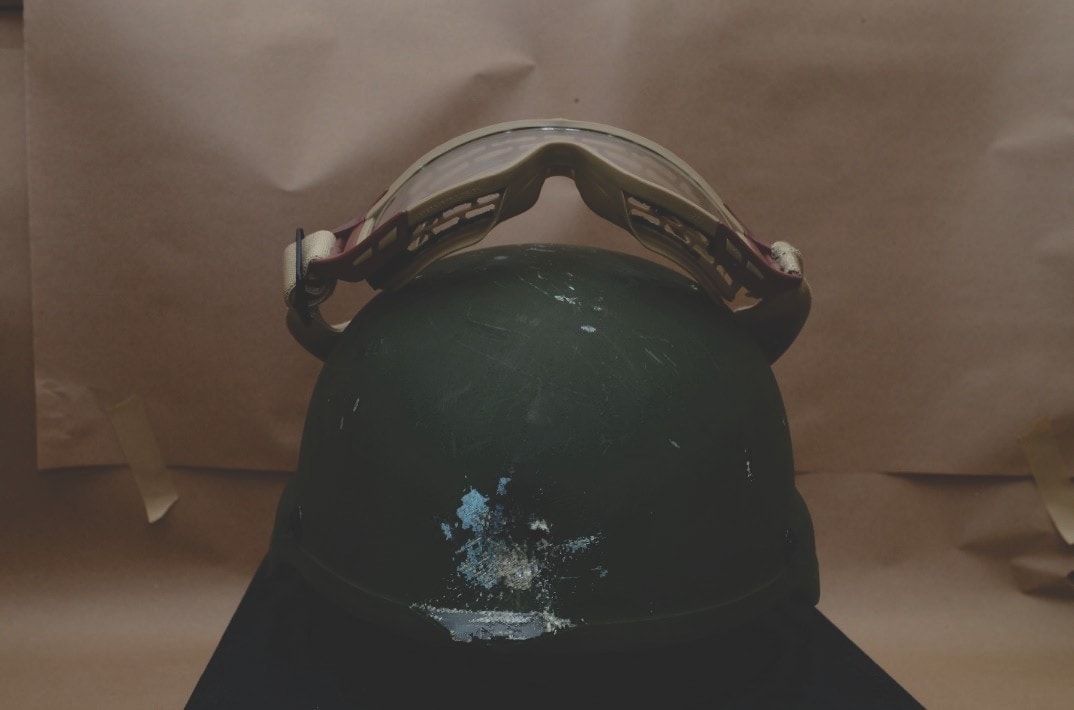 The ballistic helmet of the officer shot by the subject

During the final contact, an officer was hit in the helmet and after falling to the ground, “while lying on his side, he returned fire, emptying his magazine.”

Although the review was positive of the city and county’s overall response to the attack, it noted Orlando police did not have decontamination protocols in place and some of the responders and later volunteers had not been trained to handle high-stress situations such as mass casualty incidents. There were also communication break-downs when it came to the location of staging areas during the incident.

However, because of quick response in getting those injured to trauma care within the “golden hour” of their injuries, the review found that 58 wounded survivors who were treated at local hospitals survived while only 11 who were shot inside of the club and brought out alive did not.

“As threats of terrorism persist and our law enforcement officers and first responders continue to put themselves in harm’s way to protect us, efforts such as this can help save many lives,” Washington said.