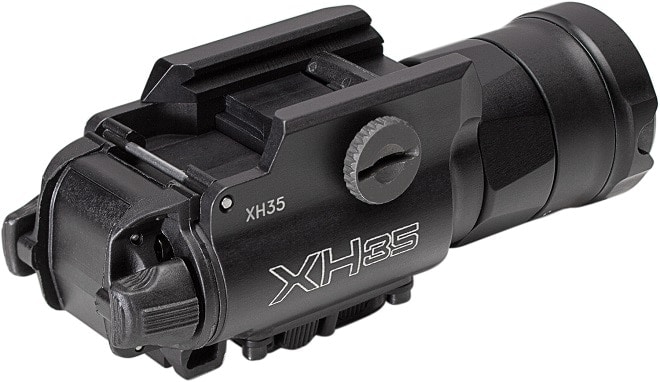 The new XH35 toggles between 1,000 lumens and 300 lumens as well as from continuous to strobe light modes. (Photo: SureFire)

Announced Monday, the newest weapon mounted light from SureFire, the XH35, builds on the legacy X300U and X400U series by using an ambidextrous rear-mounted switch, but brings a pair of mode selector switches to the party. The first toggles between a 1,000 or 300-lumen beam from the recoil-proof LED. The second switch allows the user to choose between continuous light operation and a strobe mode.

Powered by a pair of CR123As, battery life on the 1,000-lumen setting is advertised as 1.5-hours while the lower 300 setting stretches that duration to 2.5-hours. Weight is 4.8-ounces and the light has a 3.7-inch length.

While the XH35 is billed as able to mount to any handgun or long gun equipped with a universal or Picatinny rail, the only compatible holster mentioned by SureFire is their proprietary MasterFire series, which means those with older leather or Kydex made for X300/400s may have to upgrade their smoke wagon’s skin as well.