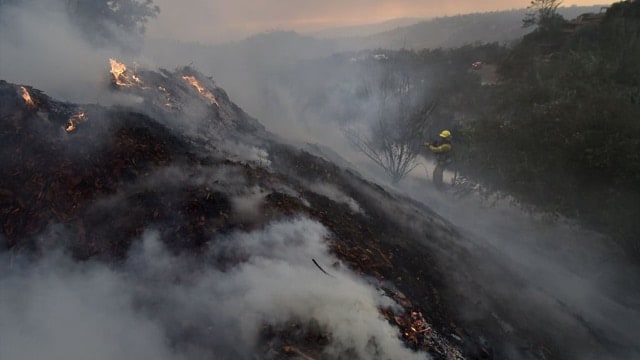 A firefighter puts out hotspots on a smoldering hillside in Montecito, California as strong winds blow smoke and embers inland, Dec. 16, 2017 at the Thomas Fire. (Photo: Robyn Beck/AFP/Getty Images)

The federal government issued guidance earlier this month to federally licensed firearms dealers stuck in the path of California’s wildfires.

The Thomas Fire — the third largest in state history — broke out three weeks ago in southern California’s Ventura and Santa Barbara counties, northwest of Los Angeles. The blaze has destroyed more than 271,000 acres of land and 1,000 homes, with another 18,000 still threatened as the flames spread hundreds of acres a day, according to Reuters.

The Bureau of Alcohol, Tobacco, Firearms and Explosives said 508 federally licensed gun dealers operate in Los Angeles and Ventura counties. Another 173 are registered in nearby San Diego County where the Lilac Fire burned earlier this month. State officials enacted evacuation orders in portions of all three counties as firefighters struggle to contain the blazes.

The Lilac Fire has since been contained and evacuation orders for some neighborhoods in the path of the Thomas Fire have been lifted as of Tuesday, according to the California Department of Forestry and Fire Protection.

“The wildfires threatening portions of those counties are forcing evacuations,” the agency said in an advisory. “If the wildfire is imminent, ATF is recommending FELs and FFLs move their records to a safe place.”

The department said Tuesday the fire is 50 percent contained, though the National Weather Service forecasts winds will pick up speed again Wednesday through Friday. State officials don’t expect full containment of the blaze until Jan. 8, at the earliest, according to the San Diego Union-Tribune.