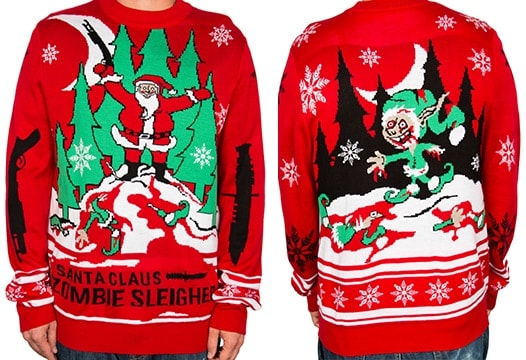 If you’re still hunting for that perfect ugly Christmas sweater — and the 5.11 Tactical snowman just didn’t cut it — LA Police Gear offers another solution to the Christmas party conundrum.

The gear and accessory supplier, slips into the Christmas spirit with its Zombie Christmas Sweater. The aptly named sweater is constructed of 100-percent acrylic material and is soft, comfortable, and warm but not too warm, according to LA Police Gear.

“Santa may not be in the best shape of his life, but what he lacks in stamina he makes up for with his deadly pump shotgun and his zombie-blood thirsty knife,” the company said in a statement describing the sweater.

With an cache of zombie approved weaponry depicted on the front and arms of the shirt, this Christmas sweater just might get you thrown out of the office party. Moral of the story? Choose your venue when donning this festive apparel.

Available in sizes small to extra large, the Zombie Christmas Sweater retails for under $10.