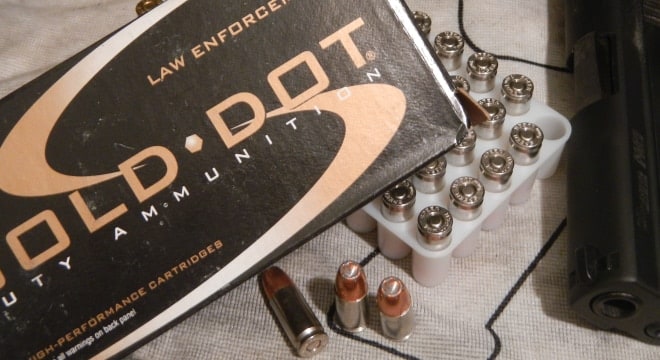 The contract could see Speer sending as many as 120 million rounds of 9mm duty ammo to DHS over the next half-decade. (Photo: Chris Eger/Guns.com)

Speer announced on Tuesday that the Immigration Customs Enforcement arm of the Department of Homeland Security awarded the company a potentially huge contract for 9mm ammunition.

The contract, for as much as 120 million rounds of 124-grain, 9mm Luger Gold Dot Duty ammunition, will make the round available to a number of agencies inside Homeland Security in addition to ICE over the next five years. Besides the immigration service, DHS encompasses the Air Marshal Service, Coast Guard, Customs and Border Protection, the Federal Law Enforcement Training Center and the Secret Service, among others.

The 124-grain Gold Dot Duty is a CCI boxer-primed jacketed hollow point that uses a bonded-core bullet with an alloyed lead core and a nickel-plated case. Specs from Speer bill the cartridge as having a muzzle velocity of 1,150 feet-per-second, generating 364 foot-pounds of energy at the muzzle of a four-inch test barrel.