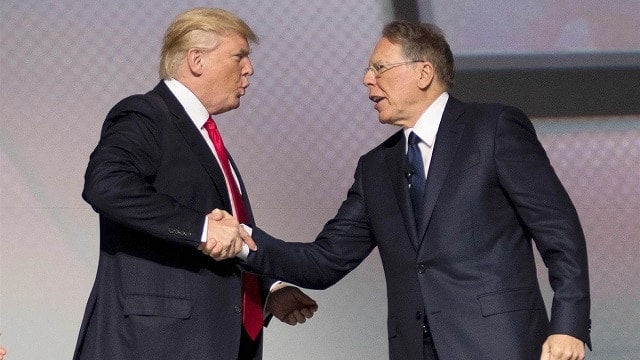 The Giffords Law Center sued the Department of Justice this week over claims the agency didn’t turn over correspondence between the Trump administration and gun rights lobbyists in a timely manner.

The center — led by former Arizona Congresswoman Gabrielle Giffords — petitioned the DOJ via three separate Freedom of Information Act requests for “any and all communications” containing search terms including prominent gun groups, their representatives and federal court nominees, among more than a dozen other words and phrases.

The point, the center says in its 18-page complaint filed Tuesday, is to shine a light on the “Washington gun lobby” and its influence over the president’s picks for federal court appointments.

“We’ve demanded that the administration turn over any records that show the gun lobby’s attempts to influence who gets named to the federal courts because the public deserves and needs to know who is calling the shots on judges,” said Robyn Thomas, executive director of the Giffords Law Center, in a news release Tuesday. “Because the administration has stonewalled us on producing these records, we’ve had no choice but to meet them in court.”

Indeed, NRA became the first major political organization to back Trump after he secured the Republican nomination in May 2016, insisting he would protect the balance of the Supreme Court and ultimately, the Second Amendment.

Trump nominated Neil Gorsuch — a former federal appeals judge from the 10th circuit with a voting record some consider more conservative than the man he replaced, Antonin Scalia — in January. The Senate confirmed his nomination just four months later.

With more than 100 other court vacancies to fill, the center insists the administration will push NRA-approved candidates to the front of the line, despite their qualifications.

“The Trump Administration has been naming judges with lifetime tenure to the federal bench at breakneck speed, and these judges will influence American law and society for the next generation,” Thomas said. “Many of these judges have alarming backgrounds and views, and it is extremely troubling that the Washington gun lobby is leveraging its financial support of President Trump and political clout to pressure the administration to appoint judges that share its radical gun agenda and absolutist view of the Second Amendment.”

One such controversial candidate, Brett Talley, was withdrawn from consideration for the U.S. District Court of the Middle District of Alabama after the American Bar Association deemed him unqualified — a reportedly rare occurrence.

The center further implicates Talley’s public commitment to the NRA — “financially, politically and intellectually” — and failure to disclose his marriage to a White House staffer as further evidence of his incompetence.

He isn’t the only judicial nominee to step down from the process, however. Just last week, Matthew Petersen withdrew his name from the running after he failed to answer basic legal questions during a Senate committee hearing.

Support for Jeff Mateer, first assistant attorney general of Texas, also dissolved after comments he made describing transgender children as “proof of Satan’s plan” in a 2015 speech while working for the First Liberty Institute came to light.

The Senate has confirmed a dozen of Trump’s circuit court judge nominees so far this year, breaking a record first set in 1891.

“Far from nominating fair minded jurists to the federal bench, the Trump Administration is trying to pack the courts with extremist judges dedicated to advancing the NRA’s dangerous agenda,” said Democracy Forward Policy and Strategy Director Corey Ciorciari. “The public has a right to know how much influence the NRA has over these critical lifetime appointments.”

The FOIA requests were filed Oct. 24 and Nov. 1, according to the complaint. The center’s counsel spoke twice with a General Information Specialist on Nov. 6 and Nov. 17 regarding the broad scope of the requests. Court documents show the specialist said it would take upwards of 10 months for the communications records to be collected.

Despite these conversations, the center says the agency never determined if it would fulfill the FOIA requests as filed — a commitment the center was due, in writing, by Dec. 15.

“By failing to respond to Plaintiff’s FOIA requests within the statutorily mandated time period, Defendant has violated its duties under 5 U.S.C. § 552, including, but not limited to, the duties to conduct a reasonable search for responsive records, to take reasonable steps to release all nonexempt information, and to not withhold responsive records,” the complaint reads.

The center seeks legal feels, plus the requested records.

A similar lawsuit filed by the center last month regarding the Bureau of Alcohol, Tobacco, Firearms and Explosives and info leaked on the “white paper” and its NRA talking points is still pending.