Mistrial declared by judge in 'Battle of Bunkerville’ trial of Bundys 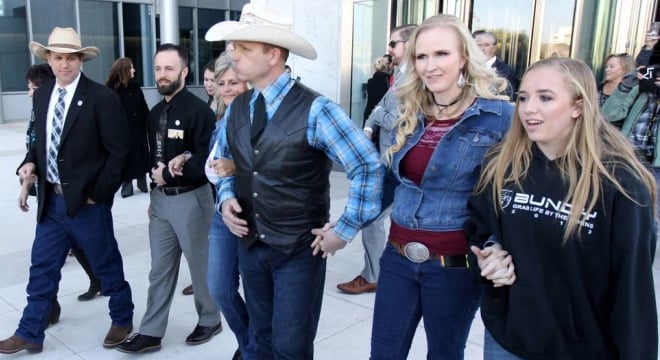 A federal judge in Las Vegas on Wednesday declared a mistrial in the case against rancher Cliven Bundy, his two sons, and a fourth man who took part in the 2014 confrontation with the federal government.

U.S. District Judge Gloria Navarro cited the government’s failure to turn over documents that could help the defendants on over a dozen conspiracy and assault charges brought against them as cause to bring the trial to a halt. “The court does regrettably believe a mistrial in this case is the most suitable and only remedy,” said Navarro, as reported by The Oregonian.

Navarro had warned more than a week ago that government missteps could result in a mistrial, and sent jurors home until evidence issues were hammered out with prosecutors. Of concern to the judge were 493 pages of internal documents relating to controversial dismissed Bureau of Land Management agent Dan Love, who was key to the case; information about a surveillance camera the FBI had pointed at the ranch; details of deployed BLM snipers during the stand-off; maps, and other reports that were withheld.

The trial has its roots going back to 1993 when BLM sought to limit the senior Bundy’s access to public land near Bunkerville, Nevada for his cattle citing the need to protect the endangered desert tortoise, to which he responded by refusing to renew his grazing permit. This sparked an ongoing dispute between the rancher and the federal government over access and grazing fees that came to a head in April 2014 when the agency moved to roundup and impound Bundy’s cattle on BLM land, triggering a modern-day range war that saw protestors, some armed, come to Bundy’s aid from across the country.

In the end, the agents backed down but prosecutors later brought up no less than 19 defendants on a series of charges related to the incident. Some have pleaded guilty, others found guilty, and some exonerated or taken plea deals with what are expected to be light sentences.

Cliven Bundy was not released Wednesday, but his sons Ammon and Ryan along with a fourth defendant, Ryan Payne, walked out of the federal courthouse arm-in-arm with family and the wife of Robert “LaVoy” Finicum, who was shot and killed in Oregon in 2016 by authorities during the occupation of the Malheur National Wildlife Refuge.

Carol Bundy, posting on the Bundy Ranch Facebook page, said they would have preferred the case was dismissed altogether “but are grateful that the truth is getting out. We are a step closer to freedom.”

For now, Navarro is weighing whether to rule if the mistrial will be with prejudice, which would block a future trial, or without prejudice which would allow a new trial to commence as early as next February.

As for prosecutors, they are weighing their options.

“We respect the ruling of the Court and take very seriously our discovery obligations,” said Steven Myhre, Nevada’s acting U.S. attorney and the lead prosecutor in the case. “The Office welcomes the assistance of the Attorney General as we continue to evaluate the case in light of the Court’s ruling.”