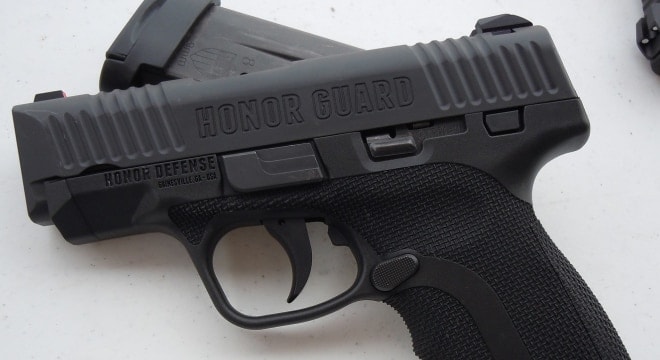 Georgia-based firearm maker Honor Defense is standing behind their flagship offering, the single stack Honor Guard 9mm pistol, amid calls that it is unsafe.

In response to a round of YouTube videos circulating this week which show Honor Guard pistols discharging after being dropped or hit with a hammer at certain angles, the company says they have always complied with industry testing standards to include drop and jar tests performed internally and by an outside lab.

“Any firearm can discharge when dropped. Like any user of a firearm, users of Honor Defense’s products must handle firearms in a safe manner,” says the company, going on to warn that, “No one should attempt to perform a drop test outside of a professionally-controlled environment.”

The company has also distributed a video showing their own testing of an Honor Defense pistol while mounted on a table rest, hitting it with a steel hammer until the frame broke without the pistol firing.

The brew up started Monday when Patrick Roberts of The Firearm Rack posted a video, now seen 35,000 times, entitled “The Honor Guard Is Not Drop Safe. They Knew Months Ago!”

In the 10-minute clip, Roberts smacks a personally-owned Honor Guard pistol loaded with a primed case with a nylon hammer, resulting in a discharge. Roberts explains he assembled the gun at the company’s factory under supervision while working for The Firearm Blog and later purchased the pistol. He also asserts that TFB spiked covering the issue he found with the handgun.

For their part, The Firearm Blog has refrained from addressing the budding tempest directly but did weigh in on their comment’s section announcing a new managing editor, saying, “Arbitrary testing is unfair to readers as well as companies. There are accredited labs for a reason.”

Roberts has subsequently made the rounds on popular YouTube gun channel roundtables standing behind what he found while other gun reviewers announced they would be making their own tests. In response to Robert’s assertions, The Truth About Guns.com performed a similar test with a rubber mallet with a factory-produced Honor Guard pistol discharging on camera.

A similar controversy with the Sig Sauer P320 resulted in that company issuing a voluntary upgrade in August for those concerned with the handgun’s safety. The pistol design is the subject of a personal injury case filed by a Connecticut police officer injured in January when his P320 pistol discharged when it hit the ground.