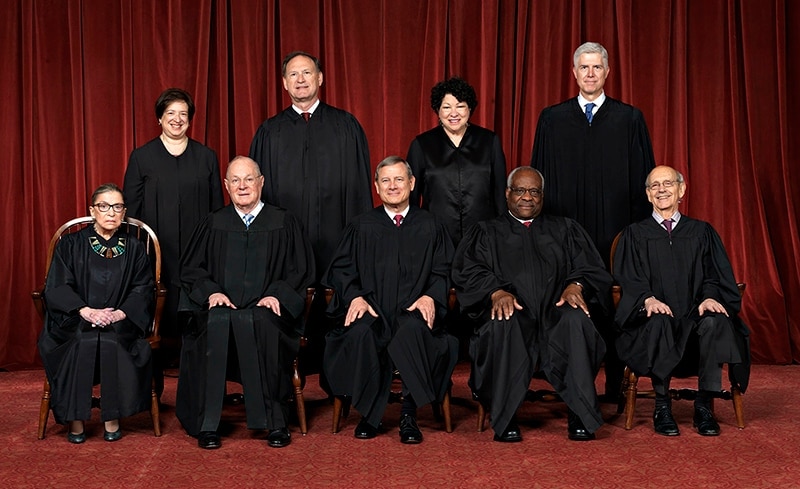 Second Amendment litigation saw important gains in the restoration of gun rights, but also significant reverses in other areas at both the federal and state level.

Just hours before a ban on grandfathered “high capacity” magazines was to take effect in California, a federal judge found a host of flaws with the pending ban and put it on hold.

In December, the U.S. Supreme Court declined to take up a challenge to Maryland’s assault weapon ban. At stake in Kolbe v. Hogan was the 2013 Maryland law signed by staunch anti-gun Democrat Gov. Martin O’Malley that banned guns deemed “assault weapons” due to cosmetic characteristics and limited magazine capacity to 10 rounds. The backers of the lawsuit, to include 21 state attorneys general and several gun rights groups, argued the firearms subject to the Maryland ban are protected under existing case law related to arms lawfully carried in common use.

The U.S. Supreme Court in January turned away a challenge to the concealed carry permitting system in Illinois brought by gun owners who say they were refused permits and offered no explanation by the state for their denial. Likewise, the court upheld California’s strict concealed carry permitting practices – leaving conservative Justices Clarence Thomas and Neil Gorsuch to cry foul.

In a win for campus carry advocates, a federal court in Texas dismissed a lawsuit brought by a trio of university professors who argued the carry of guns in their classes would chill discussion, thus hindering their right to free speech.

Florida, one of just five states that ban the open carry of firearms, saw a challenge to the prohibition rejected by both the highest courts in the state and the nation this year. Backed by Florida Carry, the group argued the ban is unconstitutional as concealed carry in the state is a licensed privilege, and conflicts with the right to keep and bear arms protected under the Second Amendment.

Officials in Washington, D.C. decided to scrap their controversial “good reason” test as part of its gun licensing program, which resulted in more permits declined than granted and effectively barred most people from carrying firearms outside of their home. The move came after a series of setbacks handed to the city by the courts and immediately saw the number of permit applications double.

In Delaware, the state supreme court lifted a long-running ban on the carry of firearms in 40,000 acres of forests and parks maintained by the state, citing the agencies that established the gun free zones lacked the authority to make such a call.

A three-judge panel of the U.S. 9th Circuit said in June that California’s allocation of $5 of the $19 fee on firearms transfers to fund efforts to collect guns from those the state deems no longer able to possess them is constitutional. The state argued that the use of the money to fund a gun confiscation program was a “common sense connection” between the payment of a fee to ensure that people who want firearms in California and the “use of that fee to recover firearms from persons who become prohibited from possessing them.”

Meanwhile, another California practice, that of a mandatory 10-day waiting period on all firearms purchases, was challenged to the U.S. Supreme Court on grounds that it is a violation of the Second Amendment.

In October, the Washington Supreme Court held that large cities such as Seattle can establish and collect local taxes and that– contrary to claims in a lawsuit filed by gun rights groups– a planned $25 fee on firearms and up to 5-cents per round of ammunition, did not violate the state’s preemption law.

Chicago’s efforts to keep gun ranges out of the city was rebuffed by the U.S. 7th Circuit in January who found the Windy City’s regulations on such businesses unconstitutional.

In a decision handed down by the U.S. 9th Circuit, a panel held that local governments could regulate the sale of firearms and that the Second Amendment does not protect the ability to engage in gun sales. The ruling came in a challenge to an Alameda County law barring gun stores within 500 feet of residential properties which effectively prohibited new shops in the area.

The U.S. Supreme Court upheld a decision that restored the lost gun rights of two men who lost them due to relatively minor sentences. One pleaded guilty to a misdemeanor charge of corrupting a minor — a 17-year-old he was in a relationship with — to which he received three years’ probation, while the other pleaded to unlawfully carrying a handgun without a license and received a 180-day suspended sentence. That case came just weeks after a panel of the U.S. 10th Circuit unanimously found that a Kansas man prohibited from gun possession due to a prior domestic battery charge shouldn’t be.

In December, a federal court found that an involuntary emergency treatment of a Pennsylvania man for less than 24 hours did not trigger a lifetime ban on firearms. Listed as a prohibited firearms possessor in the FBI’s National Instant Criminal Background Check System over the brief hospital stay, the judge in the case held the man’s brief history of mental illness did not square against federal gun prohibitions on those who have been committed to a mental institution.

A 2014 case challenging California’s microstamping mandate has spent most of the year under review by the state Supreme Court. The lawsuit is backed by the National Shooting Sports Foundation and the Sporting Arms and Ammunition Manufacturers’ Institute, who insist the legal requirement for semi-auto handguns to mark cartridges with a microscopic array of characters, that identify the make, model and serial number of the pistol upon firing was “impossible to accomplish.” The groups argue the technology is unproven in actual field conditions and easy for criminals to defeat. A decision in the matter could be forthcoming in 2018.

Following up on a 2016 U.S. Supreme Court decision clarifying tasers and stun guns were protected under the Second Amendment, gun rights groups and community activists filed a flurry of litigation targeting often longstanding prohibitions on the devices. As a result, city-wide bans in Annapolis, Baltimore, New Orleans, Philadelphia, and Tacoma fell by the wayside as did a statewide restriction in New Jersey. Further legal actions are still underway in Massachusetts and New York.