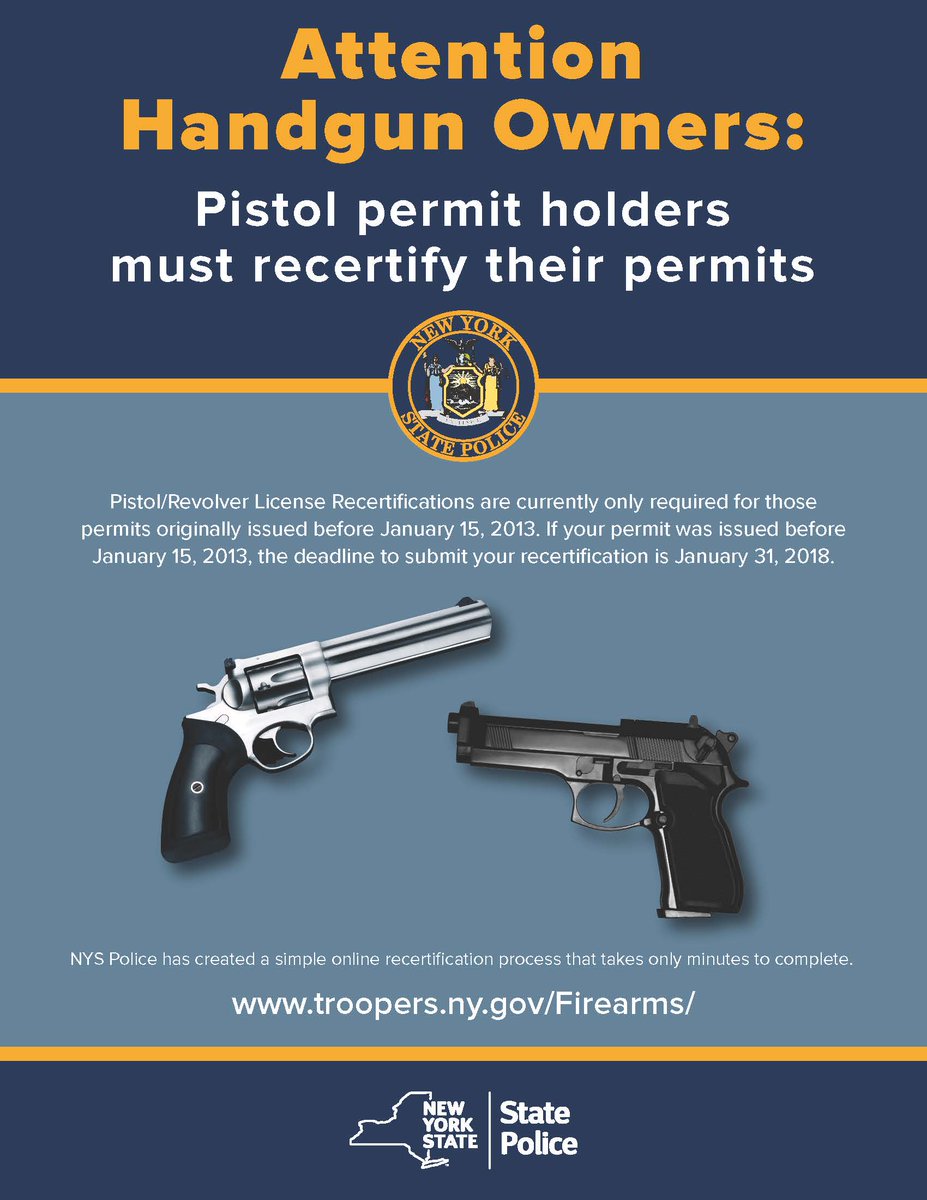 Lifetime permit holders are now facing the watershed of a mandatory re-certification deadline next month, a process described as “a mess” by county clerks.

To own a modern pistol or revolver in the Empire State requires a permit issued through the local county clerk’s office. Since Gov. Andrew Cuomo signed the New York Secure Ammunition and Firearms Enforcement Act of 2013 — commonly known as the NY SAFE Act — licenses issued since then have a five-year expiration date, meaning the myriad of lifetime pistol permits issued prior to 2013 are set to expire Jan. 31, 2018. Some county clerks, reporting that most of their expiring permits have yet to be re-certified, are worried.

“We think that there is approximately 50,000 permits (in Erie County) that haven’t been renewed,” said Erie County Clerk Michael Kearns, going on to warn that having a handgun without a valid permit could make gun owners liable to a felony charge overnight.

“If I were you and I had a pistol permit, I would re-certify it,” said Kearns. “Because if you do not re-certify it’s an automatic revocation of your license.”

It’s not just Erie County that has a glut of outstanding permits expiring in a few weeks. Lewis County Clerk Linda Hoskins told local media last week that just a quarter of the permits issued by her office have been re-certified. Rensselaer County Clerk Frank Merola says they have files on 18,000 pistol permit holders but only about 1,550 have completed the re-certification process.

New York State Police, who have sent out over 300,000 letters to affected permit holders, have been posting reminders on social media in recent weeks but say that only 205,017 of those have been re-certified.

The NYSP has been trying to establish a new database to handle the program for several years with mixed results. In 2013, a pilot of the re-certification process was trialed in seven counties then was put on hold the next year without explanation. In 2015, three counties– Albany, Schenectady, and Fulton — were enrolled in a smaller program in which 500 permit holders were contacted with an offer to voluntarily renew their license early in an effort to establish best practices and avoid a backlog.

Meanwhile, the New York State Association of County Clerks has asked Cuomo for clarification on a series of questions surrounding the permit issue including what happens to gun owners who fail to update their permits.

“Nobody took the time or made the effort to find out what all this would entail,” said Tom King, director of the New York State Rifle and Pistol Association. “This was a case of ‘let’s get this done, and we will figure it out later.’ But the details are now coming back to bite them in the butt.”

The re-certification process is not the first SAFE Act goal that New York has had problems turning into practice. A facet that mandated background checks for ammunition sales in the Empire State has been put on hold until a planned sales database could be perfected.