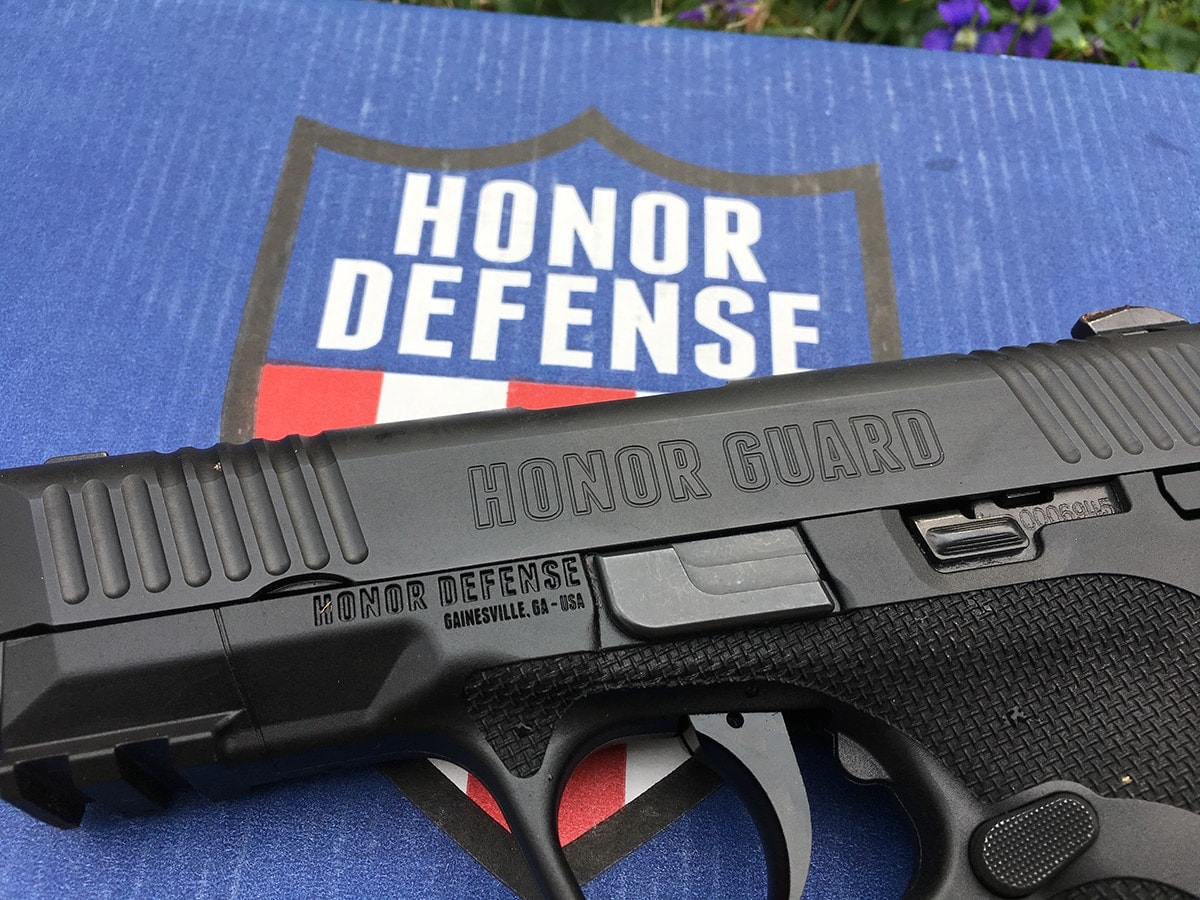 A YouTube video showing the Honor Defense Honor Guard discharging after being struck with a hammer has revived conversations regarding industry standards.

The video posted by Patrick Roberts of The Firearm Rack caused some controversy late last week after Roberts was shown smacking his personally owned Honor Guard pistol with a nylon tipped hammer. Pulling the method from the Indiana State Police Forensic Firearms Identification Unit, Roberts said the hammer test is a less brutal way to examine potential drop safety issues in pistols. The result of Roberts’ hammer test was a discharge of a primed case previously loaded in the firearm.

President of Honor Defense Gary Ramey sat down with Guns.com, explaining that the company was blind-sided by the video. “We saw the video at the same time as everybody else,” Ramey said. “It was just last week right before Christmas we saw it and first thing we did was take stock of what our next steps needed to be.”

Ramey added the company immediately set wheels in motion to explore the allegations and get to the bottom of the situation. “We reached out to five outside engineering groups that work in the firearms industry. We are engaged with three different entities now. None of which know each other. We’ve asked each of them to review our firearms and give us an assessment,” Ramey said. “We’re going to start some new testing to see if we can overcome this issue.”

After Roberts went live with his test it didn’t take long for YouTubers and Instagrammers to jump in on the action, both striking the pistol and conducting their own “drop safety tests.” The hubbub has since renewed debates regarding the industry’s current drop safety standards. The conversation, initially started by the Sig Sauer P320 drop safety concerns in August, centers on whether the gun industry should institute consistent and mandatory testing of all firearms.

Current safety standards are handled by the Sporting Arms Ammunition Manufacturers’ Institute in association with the American National Standards Institute. Founded in 1926 at the request of the federal government, SAAMI crafts and promotes technical, performance and safety standards for guns, ammo and components. SAAMI’s accreditation comes by way of ANSI, the U.S.representative for the International Standardization Organization. Together, the two entities establish standards the gun industry uses as a baseline tool.

Guns.com reached out to SAAMI for comment on whether new information gathered from the Honor Guard situation would push the organization to reevaluate standards. While SAAMI did not return emails regarding the Honor Guard, the organization did offer a comment during the Sig Sauer incident earlier in the year. At that time, SAAMI’s Executive Director Richard Patterson told Guns.com in an email that the group takes safety very seriously.

“As an ANSI accredited standards developer, SAAMI must follow the strict standards development protocols established by ANSI and ISO. Part of that process includes a mandatory regular reaffirmation of each standard,” Patterson said in August. “This requirement ensures the existing ANSI/SAAMI standards continue to evolve to meet the needs of the marketplace. It is a rigorous process that SAAMI takes very seriously.”

While ANSI/SAAMI oversee regulations enacted by the industry, none of the regs are mandatory nor is there any consistency between state organizations. Andrew Tuohy, who broke the Sig Sauer P320 drop safety story, told Guns.com in August that in a perfect world the organizations handling gun regs would better communicate effective means of testing modern day pistols.

Guns.com reached out to Tuohy for his take on the Honor Guard video. After reviewing Roberts’ test Tuohy said that the assessment seemed valid.

“(Roberts) certainly seems to have found an appropriate test protocol and is following it. That Indiana State Police paper says to strike the pistol at various angles — ten times per angle. He obviously didn’t need that many strikes to get the (un)desired result. I don’t have any issues with the way he did the test and I’m glad to see other people checking this stuff out,” Tuohy said.

Honor Defense, for its part, reiterates the Honor Guard pistols passed all current safety regulations established by ANSI/SAAMI. “We’ve passed every ANSI/SAAMI, National Institute of Justice drop test and jar off tests. We passed them all successfully,” Ramey said. “We tested them internally and with an external company…we passed it all.”

Though no upgrades or specific details have been offered by the gun maker regarding what the future holds for the Honor Guard, Honor Defense told Guns.com that consumers can expect the company to step up and take the responsible route.