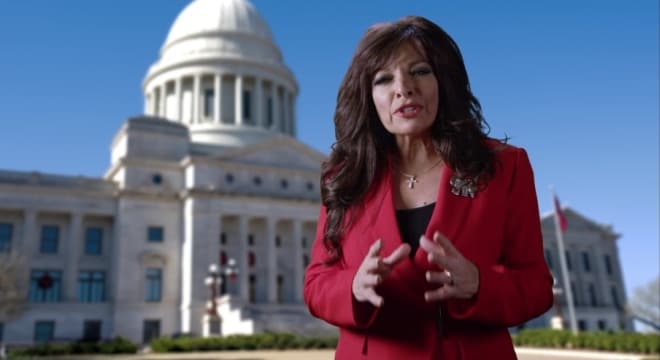 Morgan touched on gun rights in her 11-minute video announcement, directly calling out Hutchinson over his stance on constitutional or permitless carry in Arkansas.

Morgan, who catapulted to national attention after she declared her gun range a “Muslim-free” zone, had hinted at the possibility of running against Hutchinson over the past several months before making her campaign official last week. Tackling the former U.S. Attorney, DEA Administrator and Congressman on issues ranging from jobs and crime to healthcare, Morgan touched on gun rights in her 11-minute video announcement, directly calling out Hutchinson over his stance on constitutional or permitless carry in Arkansas.

“An armed society is a polite society,” said Morgan, contending that Arkansas recognizes permitless carry as part of the state constitution and any assertions made by Hutchinson to the opposite are “egregious.”

The two figures have dickered back and forth over the issue of carry rights in the state in recent months, with Morgan, who has nearly a quarter-million followers on social media, repeatedly calling out Hutchinson on constitutional carry in Arkansas. While he has not addressed the gun range owner and firearms instructor publicly, the state’s chief executive recently directed the Arkansas State Police that he considers open carry the law of the land, a move that drew admonishment from Morgan.

Hutchinson has long had the support of the National Rifle Association, spearheading the group’s school security task force in the wake of the 2012 Sandy Hook shooting in Newtown, Connecticut; receiving the organization’s “A” rating for governor and addressing the body’s annual meetings. Last year he signed HB 1249, an NRA-backed bill — which Morgan opposed in part– that brought a new series of enhanced carry permits to Arkansas.

Morgan, a former political science and mass communication student at Texas A&M and one-time New Orleans TV news anchor, makes frequent appearances on Fox News and as a contributor for Breitbart and The Daily Caller. In 2014, she declared her business, the Gun Cave Indoor Firing Range in Hot Springs, a “Muslim-free” zone.

“Because the nature of my business involves firearms and shooting firearms in an enclosed environment, my patrons are not comfortable being around Muslims who align themselves with a religion that clearly commands hate, murder, and violence against all non-Muslims,” Morgan said when announcing the controversial decision.

She is the first declared GOP opponent to Hutchinson and, if elected, would be the state’s first female governor.

The only declared Democrat candidate is Jared Henderson, who for the past several years has been involved in public education groups.