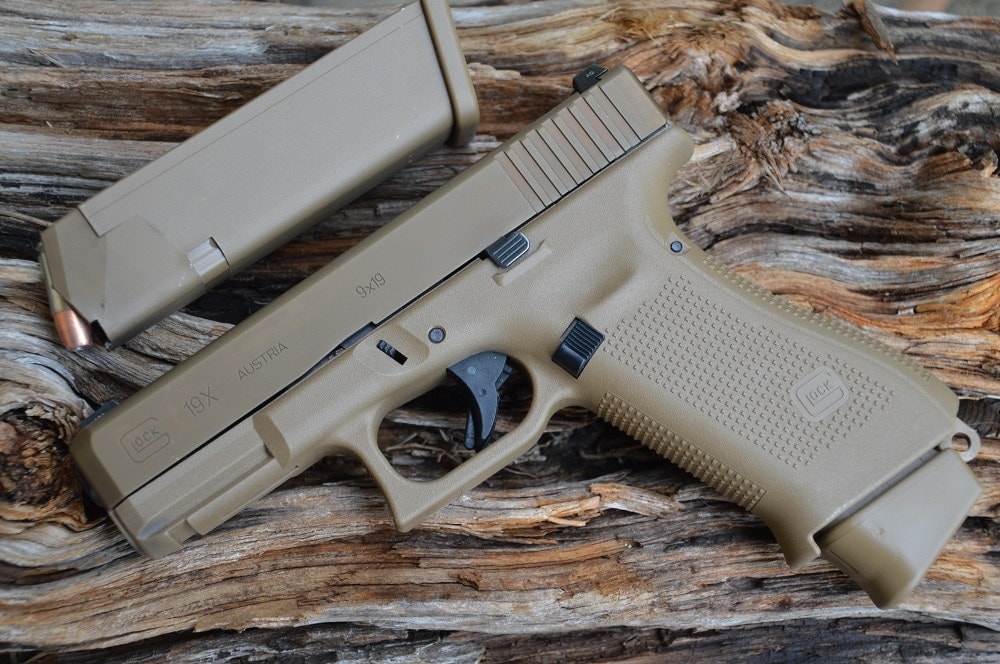 The Glock 19X ships with both 17-round flush and 19-round extended magazines, all in Coyote. (Photos: Chris Eger/Guns.com)

Developed for the military and now marketed as a “do all” handgun, the new Glock 19X blends a full-sized frame with a compact slide and Gen 5 features.

Using a factory Coyote scheme– a first for Glock— the 19X incorporates a G19 slide with a modified Glock 17 frame that uses a G19-length dust cover. Going past the coatings, which include an nPVD finish on the slide and nDLC finish on the barrel, the newest handgun in Glock’s stable includes a lanyard loop as a nod to its military roots. Standard Gen 5 features carried over by the pistol include a grip devoid of finger grooves, ambi slide stops, a Glock Marksman Barrel with a new rifling and crown design, dehorned nose profile on the slide, and flared mag well. 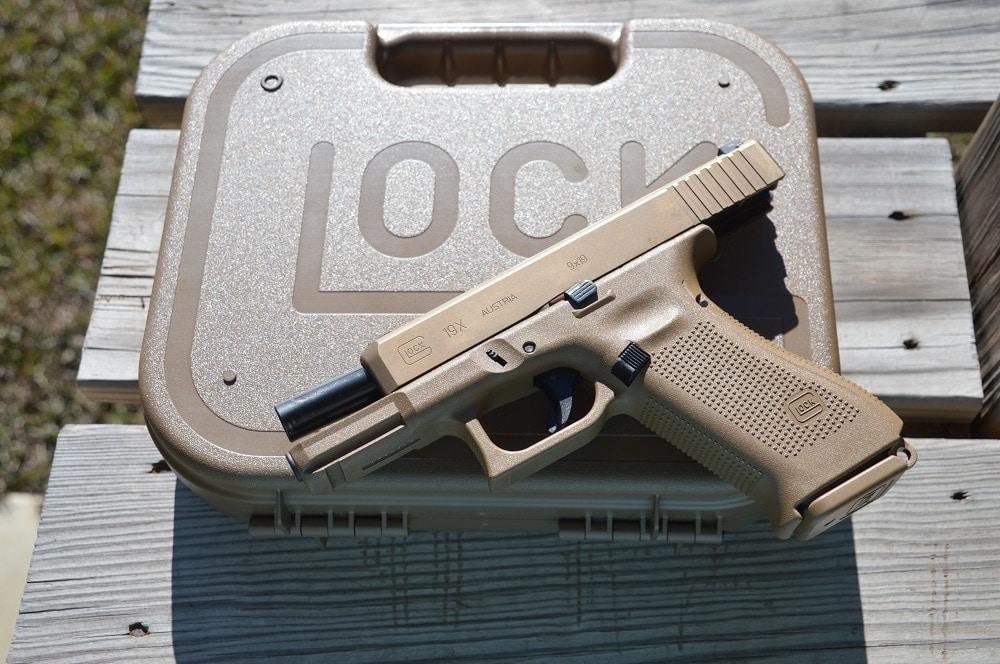 “The G19X was developed for the military and is a practical everyday pistol that will do what you need it to do, when you need it to; every time, in every condition,” said Josh Dorsey, Glock vice president, going on to touch on the background of the updated design.

“Through rigorous testing, the G19X stands out above the competition and has the ability to function in harsh climates and all conditions with increased accuracy and ultimate reliability,” said Dorsey. “With proven testing results and fewer parts than our competitors’ pistols, the G19X has maximum efficiency, reliability and is easy to maintain.” 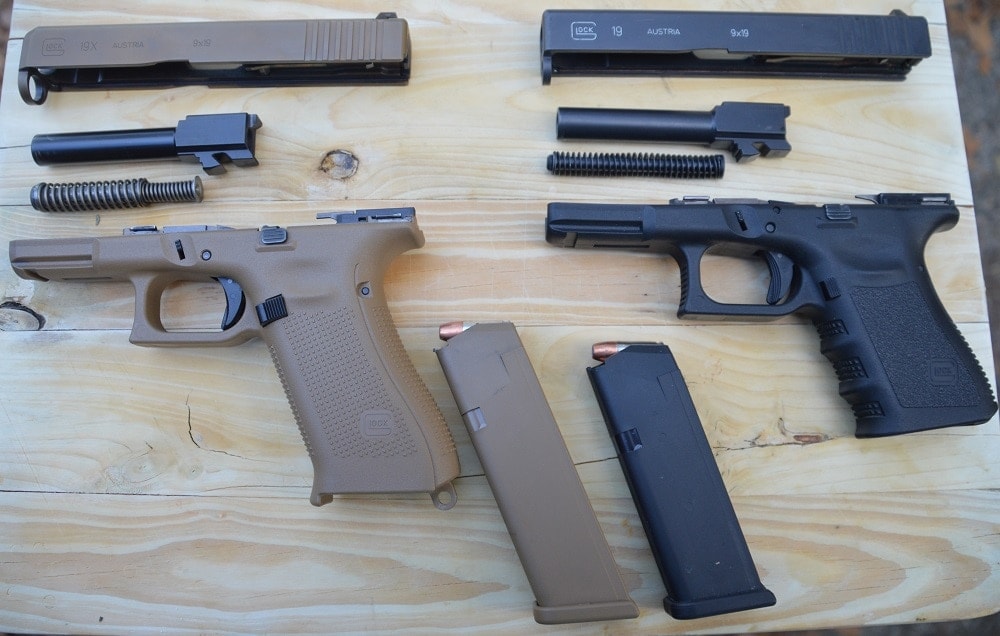 When stacked up against a legacy Gen 3 G19, it is easy to spot the longer frame– and magazine– of the G19X, though the gun is only about an ounce heavier unloaded. (Photo: Chris Eger/Guns.com)

Glock was one of the prime competitors in the Army’s Modular Handgun System program, which sought to replace the military’s aging stockpiles of M9 Berettas, adopted in the 1980s, with a more modern design. In the end, Sig Sauer was awarded the contract in early-2016, largely over price, with a variant of that company’s P320 subsequently adopted as the M17/M18. Glock felt the contract was improperly valued and that their offering met or exceeded the Army’s requirements, and, if tested long enough, would have been the winner, though their protest of the award was dismissed.

Since then, other MHS bidders such as Beretta and FN have marketed new handguns developed from their submissions to the competitions while information about Glock’s submission was scarce. Images released of the Glock MHS showed variants of the G19 and G23 with a lanyard ring at the bottom of the grip, black ambi surface controls, a lack of finger grooves, a manual thumb safety, extended mags, and a Coyote-style finish. 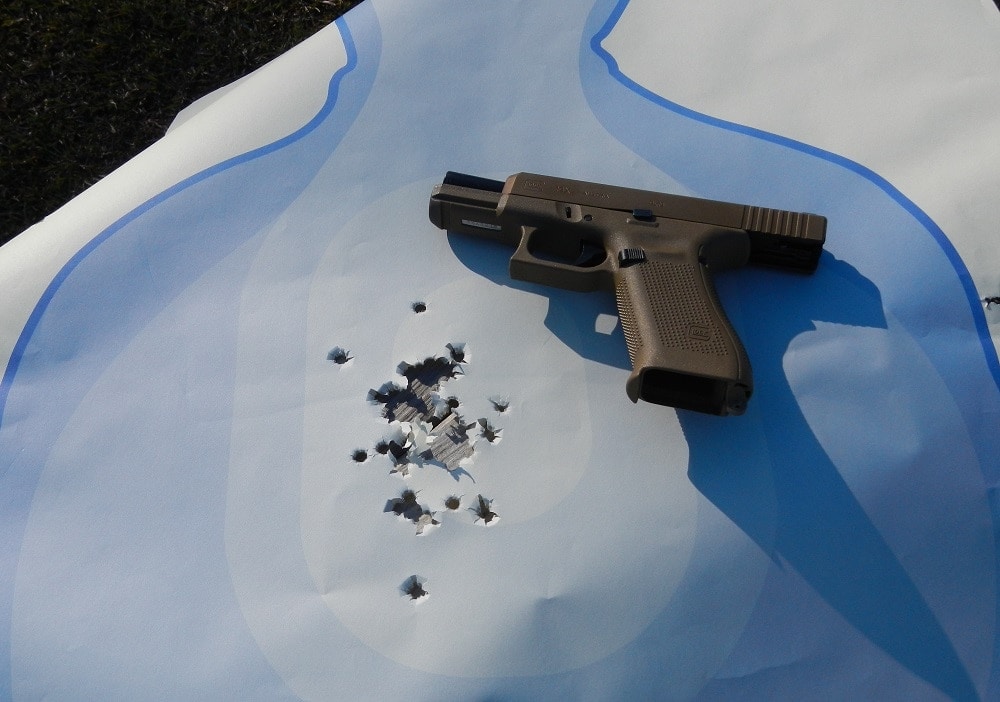 The Glock Marksman Barrel (GMB) is billed as bringing enhanced accuracy to the Glock line through new rifling and crown designs, and initial testing with the G19X seems promising. (Photo: Chris Eger/Guns.com) 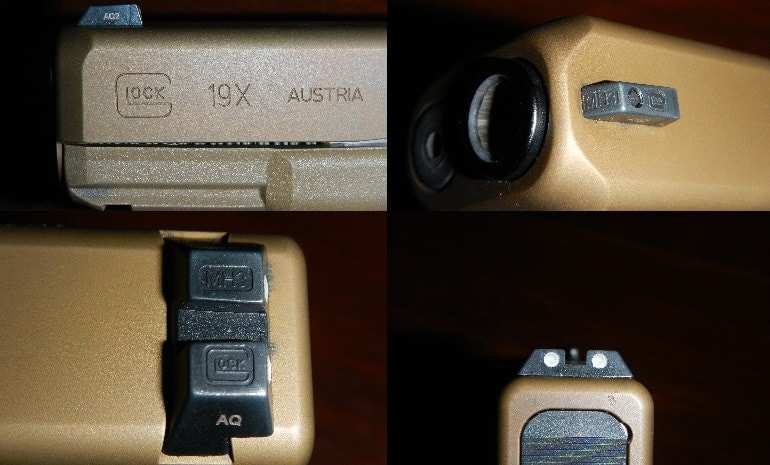 The G19X comes with factory-installed night sights for an MSRP of $749. (Photo: Chris Eger/Guns.com)

The new model G19X comes with one flush-fit 17-round magazine, two 19-round extended magazines, four interchangeable grip panels, and a Coyote colored box. 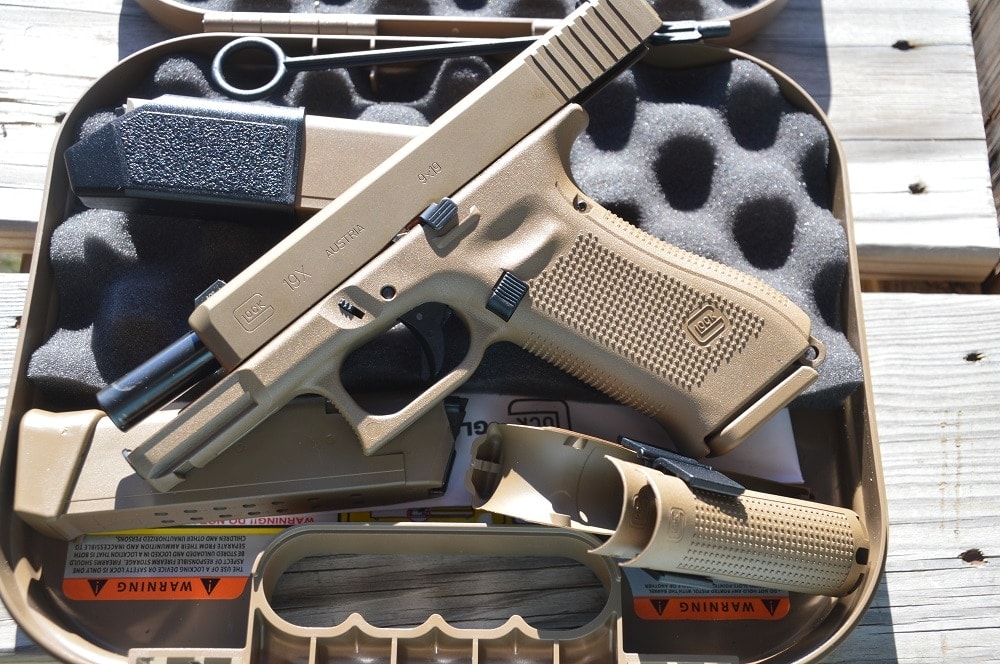 The G19X and all its accouterments. (Photo: Chris Eger/Guns.com)

MSRP is $749 with Glock Night Sights installed and the gun will be available through dealers on Jan. 22.