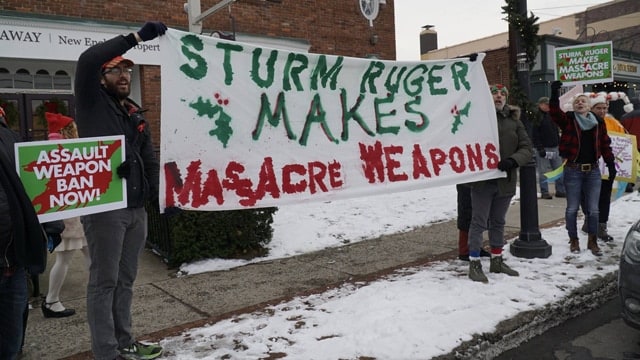 Gays Against Guns — an LGTBQ gun control group founded in the aftermath of the Orlando shooting — led a demonstration Dec. 17 through the streets of Fairfield to Ruger’s headquarters in Southport where protesters waved signs accusing the company of making “massacre weapons.”

“Sturm, Ruger and all the other AR-15 manufacturers out there have blood on their hands for continuing to profit off of weapons that should have never left the battlefield,” said Natalie James, an activist affiliated with Gays Against Guns. “The massacre in Sutherland Springs last month and the massacre that happened in nearby Sandy Hook five years ago are bloody and tragic reminders that these weapons are not fun and games and should be banned for civilian use.”

Kelley, a former Airman, should’ve never owned the rifle or the three other firearms federal investigators later traced back to him from dealers in Texas and Colorado. The U.S. Air Force court-martialed, jailed and discharged Kelley for assaulting his wife and infant stepson in 2012, but failed to report the convictions to the FBI — a widespread problem military officials admit has existed since 1997.

Gays Against Guns has targeted gun makers for its dramatic protests before — including two demonstrations at BlackRock in 2016 over the investment firm’s significant holdings in Smith & Wesson and Ruger shares.

“Know that BlackRock has millions of stock invested in Smith & Wesson,” the group said after a September 2016 protest at an NYC investor’s conference . “Both BlackRock and Smith & Wesson are complicit in death and the culture of gun violence that plagues this country.”

The group also called for a reinstatement of the 1994 assault weapons ban and urged lawmakers to reject the National Concealed Carry Reciprocity Act currently pending in the Senate. The bill passed the House Dec. 6 on a vote of 231-198.