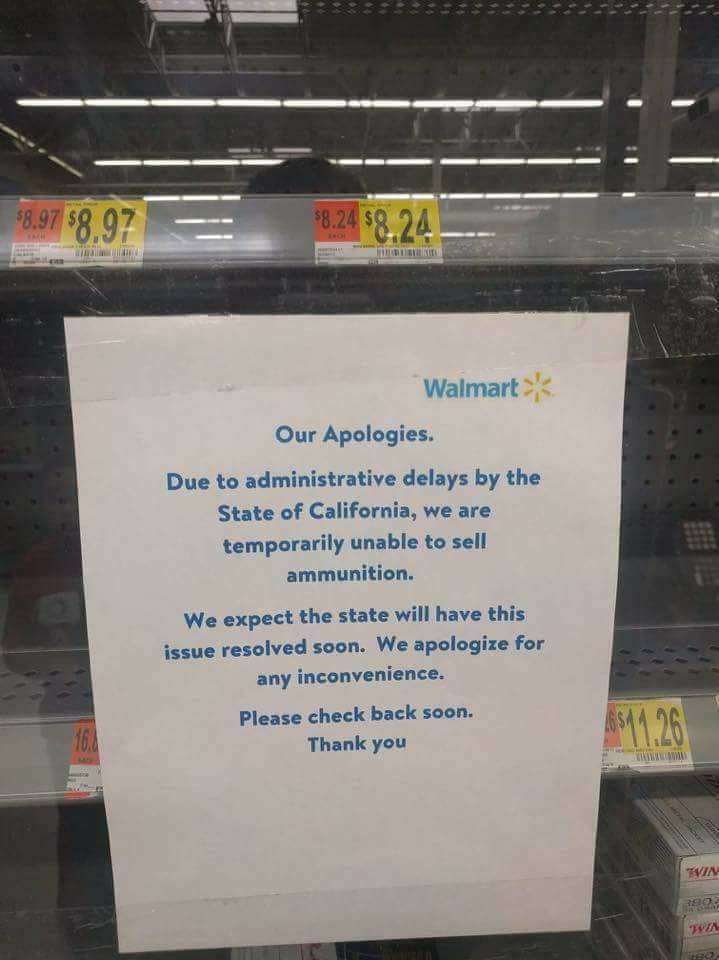 The retail powerhouse was forced to stop sales of ammunition at 131 discount department stores across the state due to administrative delays with new regulatory requirements.

Signs greeted would-be Walmart ammo buyers this week advising the halt in sales as new regulations took effect at the beginning of the year. The root of the problem? Walmart officials said they only received their new ammunition vendor licenses from the California Department of Justice late Tuesday, The Sacramento Bee reported.

It’s not just the big retailer that felt the pinch.

Foothill Ammo in Cameron Park was left without a license but opened anyway on Tuesday, even if it meant ignoring the new regulations.

“I did all my paperwork. I paid the fees. They’ve had time to figure this out. This is not my problem,” said owner Chris Puehse, though he did later post on social media that his license was finally emailed late Tuesday.

On behalf of Puehse and others, El Dorado County Sheriff John D’Agostino requested Attorney General Becerra issue a stay on enforcement on the regulations until DOJ had completed issuing licenses, arguing the state’s suggestion that vendors waiting for their paperwork should close their doors would “force law-abiding citizens to choose between being criminals or not providing for their families.”

The change in the law and new licensing procedures came about with the success of Proposition 63, which criminalized the private transfer of ammo in the state. Backed by California Lt. Gov. Gavin Newsom as the “Safety for All” voter referendum, the measure requires background checks prior to all ammunition sales as well as a moratorium on direct internet sales. Vendors must secure an annual permit and ammo would have to be displayed in a way that it is not accessible to the public, such as in a locked case or cabinet. The move has already driven at least one small ammo maker in the state out of business while forcing online retailers to modify their sales in the state.

With the historic new ammuniton controls only approved this week by California regulators, the National Rifle Association and their state affiliate advise they are working on a lawsuit to challenge the state’s mandates.