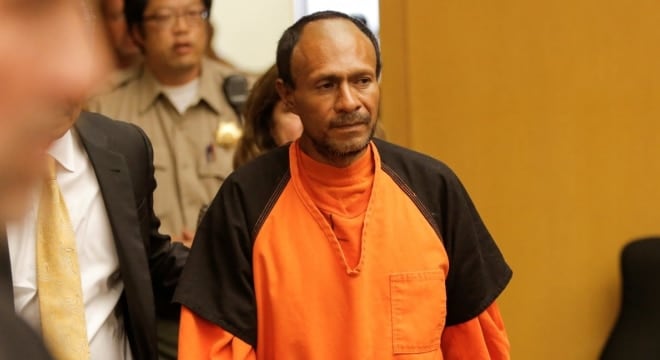 Jose Ines Garcia Zarate, arrested in the fatal shooting of Kate Steinle on a pier, is led into the San Francisco Hall of Justice for his 2015 arraignment. (Photo: Michael Macor/Reuters)

Mexican national Jose Ines Garcia Zarate would have walked free after sentencing last week but instead was transferred to federal custody on weapon charges.

The man tried and found not guilty of shooting Kate Steinle was sentenced by San Francisco Superior Court Judge Samuel Feng to time served on his gun possession charge and was subsequently transferred to a federal detention facility on Friday. Feng swatted away a request by his attorneys for a new trial in the case and sentenced him to three years, the maximum allowable under California law on a charge of unlawful possession of a firearm by a felon. Since being arrested he had served past that amount when other sentencing parameters were weighed.

“He has actually spent around 400 days longer than the maximum sentence,” said Francisco Ugarte, one of Garcia Zarate’ attorneys.

The Mexican national, listed by four aliases on his federal indictment handed down last month, had at least seven felonies and five deportations under his belt and was the subject of a federal detainer order prior to Steinle’s death.

According to a release from the San Francisco’s Public Defender’s office, attorney Tony Serra will defend Garcia Zarate on the federal gun charges. Serra is a high-profile activist who in the past has represented Chinatown gangster Raymond “Shrimp Boy” Chow as well as members of the Black Panthers and Symbionese Liberation Army.

“There was clear and overwhelming evidence presented at trial that this tragic shooting was an accident,” said Matt Gonzalez, chief attorney of the San Francisco Public Defender’s Office and Garcia Zarate’s lawyer in the state case. “The federal government is free to spend more time and resources on this case, but the facts have not changed. I predict a properly instructed jury will acquit Mr. Garcia Zarate in federal court.”

The handgun which killed Kate Steinle in July 2015 was stolen from a federal agent and found by Garcia Zarate under the bench of a pier wrapped in a shirt. His attorneys argued he did not know it was a gun when he picked it up and threw it in the Bay after it fired. Ballistics experts in the case characterized the shooting an accident as the bullet that Garcia Zarate fired ricocheted off the pavement away from him before traveling another 75 feet and striking Steinle.

Steinle’s family is currently part of a lawsuit cleared to proceed last year by the courts against the federal government over the handgun.  In the case, a judge held that leaving a loaded gun in a backpack visible on the seat of an unattended vehicle in a high-crime area of San Francisco by the agent created a foreseeable risk of harm.