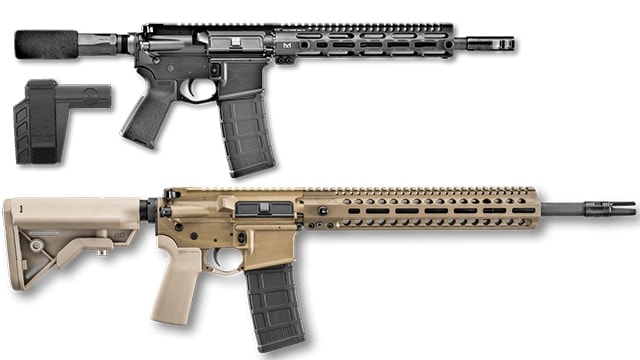 FN rolled out new variations on its FN 15 series, introducing a pistol variant in two calibers and a flat dark earth carbine ahead of the industry’s biggest event, SHOT Show.

Chambered in 5.56x45mm NATO or .300 BLK, the FN-15 pistols offer barrel lengths in either 10.5 or 12-inches. The cold hammer-forged, chrome-lined barrels feature a 1-in-7-inch twist paired with carbine and pistol length gas systems for “optimal performance.”

Next in line to be added to the FN 15 series is the FN-15 Tactical Carbine in the tactically adored Flat Dark Earth color scheme. The FDE carbine boasts an enhanced Mil-Spec lower receiver paired with a match-grade free-floating, chrome-lined barrel. In keeping with the FN Tactical look and feel, the FDE version is outfitted with a 3-prong flash hider, B5 grip and 12.5-inch P-LOK rail with M-LOK mounting points. MSRP is $1,499.

In addition to the FN 15 carbine and pistol options, FN is also releasing a FDE and BLK series. The lineup will include the FN 509, FNS-9 Compact, FNX-45 and FNX-45 Tactical, FN Five-seveN, FN 15 Tactical Carbine II, FN M249S and FN M249S PARA in, you guessed it, a mesh of FDE and black. Firearm frames will feature the popular tan color while slides and accessories will ship in black. Prices start at $599 for the pistols, topping out at $10,288 for the FN M249S PARA model.