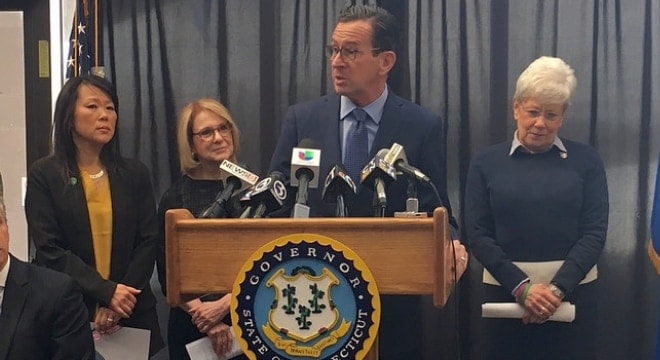 Flanked by gun control advocates at a press conference Tuesday, Gov. Dannel Malloy (D) announced his first legislative drive of the year– a ban on bump stocks. (Photo: Office of the Governor)

A legislative ban on the purchase and sale of “rate of fire enhancements” in the state is the next planned addition to the state’s already strict gun control laws.

Gov. Dannel Malloy on Tuesday proposed the ban on binary trigger systems, bump stock, and trigger cranks with those found in possession of such devices subject to a Class D felony charge.

“Bump stocks are cheap, they are deadly, and they have no place in our society,” Malloy said in a statement, going on to slam what he termed federal inaction on the controversial accessories. “Our state has long been a champion in the fight against gun violence, and today we take a step towards further cementing our reputation as a leader in smart, safe, and commonsense gun reform.”

Malloy’s proposed legislation would create a definition of a “rate of fire enhancement” under state law as an accessory that uses the recoil impulse from a firearm to “generate a reciprocating action that facilitates repeated operation of the trigger,” with an exception for guns designed specifically to designed function with such a crank or lever. If passed into law, those in possession of a device that fits the new definition would be subject to a $90 fine on the first offense and up to 5 years in prison and a fine of as much as $5,000 on subsequent charges.

Malloy, a Democrat, signed expansions of the state’s assault weapon ban into law in 2013 following the shooting at Sandy Hook Elementary in Newtown and has consistently championed other gun restrictions to include massive fee hikes on pistol permits. His latest proposal has the support of several area gun control groups including the Newtown Action Alliance and Connecticut Against Gun Violence, as well as Moms Demand Action, who were on hand for Malloy’s press conference announcing the push.

However, Second Amendment advocates argue the move is “feel-good legislation” that would have little effect on your average gun owner, but still caution against any sort of prohibition.

“You go down a rabbit hole in perpetuity, talking limitations on things that should or shouldn’t be banned,” said Scott Wilson of the Connecticut Citizens Defense League, saying his group does not have a position on Malloy’s newest proposal as it’s language is not available.

Bans on bump stocks have proven to be low hanging fruit in legislatures across the nation with both Massachusetts and New Jersey passing measures to outlaw the devices since their use in the Route 91 Harvest Festival shooting in Las Vegas last October. Lawmakers in almost a dozen other states are considering similar restrictions. A number of bills introduced at the federal level are still in committee.